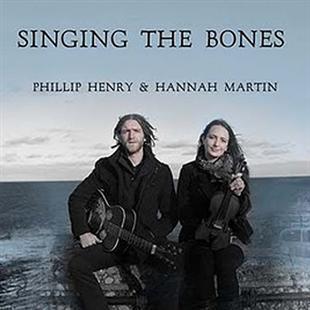 Singing the Bones is a collection of original and traditional material from Philip Henry and Hannah Martin.

The excellent dobro and guitar playing from Philip and fiddle from Hannah lend an eerie tone to the album, which fits perfectly to the subject matter of many of the tracks. Old Adam the Poacher is a vivid and highly entertaining characterisation of a Devon legend with a subtext about the resilience of folk music, while Three Witches, with its Shakespearean opening lyrics, is again rooted in the south west, being based on the Bideford witch trials of 1682.

The next tracks are interpretations of the standards Death and the Lad’ and Courting is a Pleasure. While the former works very well with the overall tone of the album, the latter is a much darker version than most and feels perhaps a little incongruous as a result.

Slower paced and rather wistful, the beautiful Highlands-inspired instrumental Cape Wrath has a real sense of ’place’, transporting the listeners to the rugged shores of the Scottish north coast. Lullaby is a poignant tale of loss before an upbeat change of pace comes from the lively Southill Hornpipe.

More dobro virtuosity is on display in Separation of Body and Soul and a fine instrumental from both artists is given on the excellent Catharsis. The bonus track on the album, The Boy That Wouldn’t Hoe Corn is heavily influenced by American blues and the previous arrangement by Union Station, and is a powerful showcase for Philip Henry’s instrumental talent.