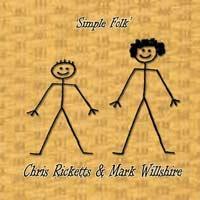 The title and album cover of this debut album by Chris Ricketts and Mark Willshire is rather self-deprecating. Whilst the combination of guitar, bass and voicebmay be sparse, the arrangements and performance are certainly not.

This unassuming-looking album contains eight traditional tracks that switch between the narrative and the more meditative. The arrangements are never over the top, allowing Chris’ voice to come to the fore, supporting the lyrics and tone of each song well.

Some of the tracks have an American influence, like ’Chase the Buffalo’, and at times I am reminded of Martin Simpson and Steve Tilston in the style of guitar delivery, which is never a bad thing.

I was particularly interested to hear ’Briery Bush’, a song known by myriad similar titles and intimately by me as Spiers and Boden’s ’Prickle-Eye Bush’. The plot remains the same, but Chris and Mark’s subtle instrumentation gives the song a slightly contemplative feel, and I can picture the protagonist sat with a guitar awaiting his fate.

On the up tempo side of ’Simple Folk’ I enjoyed ’Sally Brown’ and Nobody’s Fault But Mine’, both of which I found myself wiggling along to. But the song that stuck in my mind most was ’Which Side Are You On?’. The almost hypnotic chant style of the refrain rooted itself firmly in my brain and for days.

The guitar playing and vocal stylings of Chris and Mark are thoroughly enjoyable, and it’s very easy to put this CD on repeat. As am album ’Simple Folk’ showcases some promising new talent in guitar-based folk, and looks a good launching pad for these two young performers. In fact, so much so that they have recently signed to Hobgoblin, and an extended edition of the album will be released later in the year.