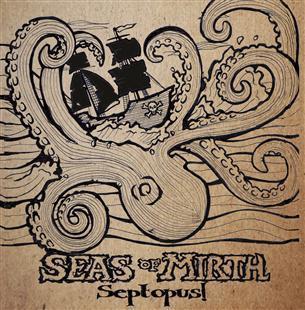 A Pirate Band they certainly ’arrrrgh!

Before you even reach the music Seas of Mirth will bring a smile to your face with their silly puns and efforts to fit in every single pirate stereotype possible. Their website and CD booklet, as well as their music, are all platforms to really rope you into the fantasy land of pirates and buccaneers.

The track listing for their debut album Septopus!, even by folk music standards, contains some of the most random titles you can imagine. Names such as The Crab Devastation of 1754 really paint us an image of how the music will follow.

This nine piece band uses an assortment of instruments from modern electric guitars and drums to more traditional squeezeboxes, fiddles and melodica . This folk/rock combination can be difficult to pull off but Seas of Mirth do it very well.

They have a consistent sound throughout the album with only a few variations in the music. The main thing to note about this band is how their booming voices dominate over the instruments.

We are given a strong set of lively shanties which cannot be said to make a whole lot of sense, but herein lays the beauty. Each track is lively and bouncy giving that urge to foot tap along with them. Some tracks, such as White Whale are easier to follow and do cushion the rest of the album with a more traditional shanty style, but each tune fits in perfectly with the album and aim of the band.

The majority of the sets are hilarious when you do manage to break down the lyrics. The Crab Devastation of 1754 and Ly Ly Ladyboy are two of the most comical shanties I have heard for a while. It is worth noting that some of the tracks can be quite rude, but in a tongue in cheek way rather than simple profanity.

When listening to the album it is easy to picture Seas of Mirth being a very interesting live act as there are so many opportunities to rope the audience in to their world, it can even perhaps hint along the lines of a cabaret act.

Overall a very entertaining album with more than a few chuckles in store.