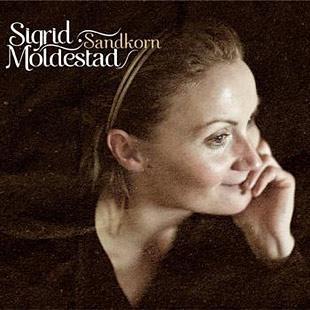 Sigrid Moldenstad is a rising star of the Norwegian folk scene, having won that country’s Folk Music Award in 2010. Her latest album ’Sandkorn’ is an atmospheric and accomplished work.

The music highlights that most traditional of Nordic instruments, the Hardanger fiddle but combined with a wide variety of other instruments including the piano, guitar and saxophone to give a very fresh, original feel.

Moldestad’s own expressive vocals, performed entirely in Norwegian, are a real highlight. The themes of ’Sandkorn’, translated as ’Grains of Sand’ are “romantic, bringing to mind both the beauty and the tragedy in love” and this comes across very clearly from the music. Clever changes of tempo and instrumental combinations drive the emotional point home effectively.

Both traditional and original compositions are featured, including, on one track, translated lyrics from Robert Burns. Particular highlights are the vibrant instrumental ’Uncle J’, the lulling and soothing ’Om Eg Var Deg’ and the duet of ’Maneskinslandet’. Sandkorn is an excellent album of Nordic Folk.