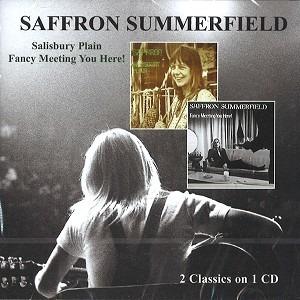 A reissue of two albums originally released in the 70s, Saffron Summerfield’s Salisbury Plain / Fancy Meeting You Here! is a record full of passion and skill.

Summerfield is a musician of vast talent - she plays guitar like it was built for her, and is as at home with bottleneck blues style as with heavy strumming or gentle fingerpicking. Her voice is also very versatile, bringing life to her songs with the different styles she employs.

Opener Meet You There is a bright, upbeat track with guitar backing that initially appears simple, but quickly becomes more complex and climactic. It’s followed by the slightly anthemic Natural Life and then by the only traditional song on the album, The Dowie Dens O’ Yarrow.

Summerfield takes a completely different approach with this one, opening a capella and almost free-time before fading into gentle guitar fingerpicking. The breathy vibrato technique she uses to stretch out the end of the verses won’t be to everyone’s taste, but it’s very interesting and skilfully done.

Another standout song is the foot-tapping Francis Road Rag. The playing and singing here is so infectiously happy that it’s impossible not to have your spirits lifted by it. Summerfield also treats her listeners to an excellent rendition of Eleanor Rigby, full of mystery and anticipation.

This record is certainly not all bubbly and uplifting, though; Summerfield is fierce, impassioned and to the point in songs like I Won’t Stand Up and Passion for a Child. The title track of Fancy Meeting You Here is dark, nostalgic and something of a departure from the rest of the style, eschewing the guitar in favour of keyboards and strings.