Nigel Parry - Row Out to Your Ship of Dreams 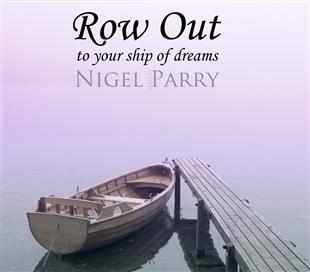 Row Out to Your Ship of Dreams, released by singer, songwriter and guitarist Nigel Parry, is a delicate and honest collection of songs, some traditional and others self-penned. Despite Nigel now living in New Zealand, the album is certainly heavily influenced by English folk music with several of the songs and subject matters familiar to many.

The album covers a range of themes: journeys, love, heartache, the supernatural and ancient war - amongst many others. With the audience never able to settle into one particular mood or setting, we are constantly kept on our toes and the album remains interesting and varied throughout.

This, in turn allows the album to explore a whole spectrum of emotion with Nigel particularly excelling in his ability to present each song as a story, his mellow vocal tone ideal for performing everything from shanties and ballads to childhood rhymes.

Nigel’s guitar playing is beautifully simple and blends with his voice so that the album does not become weighted down by an overwhelming number of instruments. Although this can often make for an exciting sound, here, Nigel is careful to highlight how effective the voice can be with often little or no accompaniment.

Nevertheless, the album often sees the coming together of vocalists and musicians who accompany Nigel on his musical journey. The hurdy gurdy in Roll on the Day lifts the whole track with its quirky sound and unique harmonies. Indeed the ocarina in She Moved Through the Fair - an instrument rarely used on such albums - is certainly the perfect choice for a song ghostly and haunting by nature.

Nigel’s interpretation of traditional songs is unique: Lowlands alternates between a solo voice and rich harmonies, which allows this track in particular to give great importance to the voice as an instrument in its own right.

The album itself sticks to a relatively slow tempo throughout, making it one to sit and listen to. Each of the tracks is fluent and soothing, with fascinating stories to tell. This characteristic of the album highlights its ability to really engage with the listener and the listener with the album.

With an understated tone to the whole album, Nigel seeks to reignite well-loved songs as well as demonstrate his own creative flare, showcasing such compositions as Ship of Dreams and In the Dawn. His personal style is very close to that of the traditional songs he has selected for his album, confirming his excellent understanding of this genre of music.

Row Out to Your Ship of Dreams: a great album and one to be recommended in particular to listeners who enjoy music that has not been over-produced but is instead in its more natural and raw state. After a 20 year break in his music career, Nigel Parry with his elegant, fluid style is a name to watch out for.