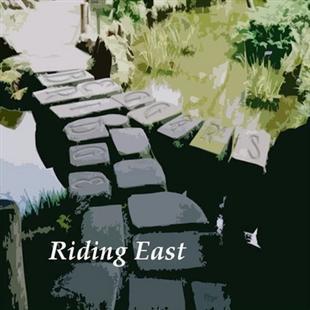 Riding East is a selection of (mostly) original songs from the folk outfit Beggar’s Bridge, a four piece who, unsurprisingly, come from the East Riding of Yorkshire. It’s a lively collection of story songs whose inspiration is drawn from the heritage of their home town and surrounding area.

Beggar’s Bridge use traditional instruments to create a wonderfully simple sound. The simplicity of the instrumentation is reminiscent of the best of the folk revivalists and the vocal harmonies are rich and especially velvety in Martyn’s voice and so add a luxurious dimension to the overall sound.

The album opens with The Rowley Witch, which features a lively flute (or is it a whistle?) part that is slightly at odds with the dark subject matter of the song, which is based on the true story of a woman who was hanged during the Salem witch trials. The rolling rhythm of the mandolin part pushes the track forward on in a surprisingly jolly manner considering the subject matter. It is very good - a fantastic album opener.

I found the female vocal parts especially beautiful. They first feature solo on the second track Gypsy Rose McRae which is at a slower pace and where a melancholy flute part beautifully offsets the lovingly gentle vocal harmony. Martyn’s vocals also sound fantastic on Willow May which is a story of a young girl who runs away with the gypsies, and as a young woman facing important decisions I found the lyrics particularly appealing as she makes the decision to "answer to no lord2 - a powerful message of the wonderful possibility of escape.

There are a couple of tracks which commemorate the seas and the brave men who sail them. Harry Eddom - once again showcasing lovely vocals - is the only cover song on the album. It is about the Hull triple trawler tragedy of 1968 and is hauntingly gentle. Taken Away By The Sea is another tribute to those who lose their life at sea and the chorus effect of the group vocals evokes sea shanties, whilst the lilting mandolin part reminds me of the motion of the sea. Old Forgotten Tales is a simple homage to the band’s home town of Hull and its rich and varied nautical history.

This release is full of evocatively local picturesque stories affectionately supplemented by Pollard’s soft Yorkshire accent. The Kiplingcotes Derby is about the oldest annual horse race in England which is, of course, held in the Yorkshire Wolds. Last of the Wold Rangers follows the story of the seasonal workers who were struck hardest by the enclosure of the countryside and celebrates the life of the final Wold ranger - Dog Geordie. And a rebellious spirit is evoked in Kings That Chase The Beast as we remember one of the first rebellions of the English Civil War.

Riding East may be thematically dark in its choice of song content but it really is a celebration of the traditions and history which have marked Beggar’s Bridge’s home. It was wildly refreshing to listen to a group of people who not only sing about their own local past but also revel in their own traditional folk sound.

1. The Rowley Witch
2. Gypsy Rose McRae
3. Harry Eddom
4. The Kiplingcote’s Derby
5. Last Of The Wold Rangers
6. Willow May
7. Land Of Chalk And Clay
8. Taken Away By The Sea
9. Old Forgotten Tales
10. Kings That Chase The Beast