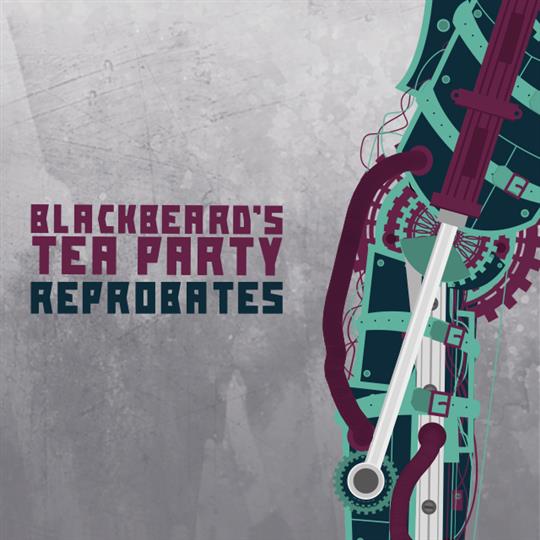 In every music genre there’s always one band or collective who are the physical embodiment of a party. Wowing festival audiences each summer these are the turns that people remember most when they’re reminiscing about that ’night in Purbeck’ or ’when it chucked it down at Shepley’. How on earth then, do you commit that type of feeling, emotion or experience to disc?

In the case of York-based rabble-rousers Blackbeard’s Tea Party the answer is very easily indeed. Over six years and three and a half albums the York-based sextet have used their impish charm to blow far more established bands clean off stage and they’re now doing it in your living room/car/headphones better than ever before on their latest album Reprobates.

Blackbeard’s Tea Party have never been content with following the folk-rock rule book and as ever their new album is chock full of Latin rhythms, funky bass and metallic guitars interweaving through some of the most downright toe-tapping tunes heard in yonks.

That they do what they do with such a mischievous grin makes them all the more engaging and the effervescence of their craft fizzes out of the speakers throughout. Reprobates is about as appropriate a title as this band could come up with, and whilst they’re not out and out reprobates themselves they’re certainly a joyous thorn in the feet of folk purists.

The album title also sets a theme for the album (every party needs a theme right?) and opens with an uproarious take on the old Victorian ballad Steam Arm Man which rolls along on a belter of a riff in all its Steampunk glory. Talk about setting your stall out! The entire record continues in the same vein of cheeky vim and vigour turning tales of some out and out nefarious characters into riotous dance-floor fillers.

Only on the closing track, a pin-drop perfect take on Alex Glasgow’s Close the Coalhouse Door ,does the energy level of diminish. The intensity is still in full effect though, with Stuart Giddens’ earthy vocal flowing ghostlike through the head-bowed, gritted teeth defiance of a wonderful song that’s every bit as powerful as the 11 bangers preceding it.

There are few bands out there that can be equally as impactful on record as they can live and for that we should be incredibly thankful to have the irreverence, charm and outright wit of Blackbeard’s Tea Party. Get involved with Reprobates immediately - it’s pretty much impossible to resist!