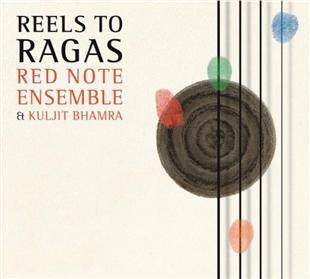 Reels to Ragas is the first album from Red Note Ensemble and Kuljit Bhamra, which sees the fusion of musical genres and ideas from one of Scotland’s finest contemporary music ensembles and a name associated with some of the finest works of the British Asian Music Scene.

The album explores the relationship between Scottish Reels and Indian Ragas, with the musicians concluding that despite their origins being continents apart, the similarities between the genres are remarkable.

Red Note Ensemble, an accomplished and fine trio of musicians is comprised of: Robert Irvine (Cello), Jacqueline Shave (violin) and Clare Finnimore (viola). The combination of three string instruments makes for a tight and polished performance. Their playing is beautifully expressive and their performances truly engaging.

The main theme running through the album is that of a journey, but there are many ways to interpret this idea: the transition of musical landscapes, emotional shifts and even personal journeys. Great care has been taken with regards to the presentation of the rapport between the two main genres of music with focus on originality and variation.

Machair to Myrrh begins with Red Note Ensemble drawing our attention to the contemporary element of the fusion before being joined by Kuljit, who adds his own rhythms and techniques to the piece, and seems to implore the other musicians to join him and share in this wonderful, exotic music.

Reels to Ragas may predominantly focus on global musical ideas but between them, the sixteen tracks also cross periods of time, bringing fresh, contemporary music into the mix amongst traditional arrangements. The contemporary compositions from some of the musicians featured highlights Reels to Ragas as both influential and refreshingly relevant combining new ideas and an appreciation for heritage and custom.

The techniques and sounds used, and atmospheres created throughout the album all reflect the main theme of a journey, but the presentation of each track is unique in its ability to take on a different mood using different rhythms and moods. Often, the tracks do not stick to a recognised pattern or form but the album seems to be as much about becoming lost in the exploration of musical relationships as it is recognising the conforms within each genre. The musicians arrange shorter performances of traditional Scottish tunes such as The Devil In The Kitchen in amongst longer expanses of what appear to be in-depth consideration of how reels and eagas work together and apart.

Red Note Ensemble and Kuljit Bhama use the collaboration not only as proof that Scottish Reels and Indian Ragas sit beautifully side by side but also that each genre in its purest form is equally important. Ca’ The Yowes, by Robert Burns, is sung beautifully on the album, the crescendo effect giving the impression of travelling from far to near, and providing a contrast to some of the more vigorous tracks.

Reels to Ragas also treats us to powerful classical harmonies and fierce improvisations which all in all, makes for a thrilling listen. This journey is undeniably unique, an album that looks at tradition from a different angle but is well worth a listen.