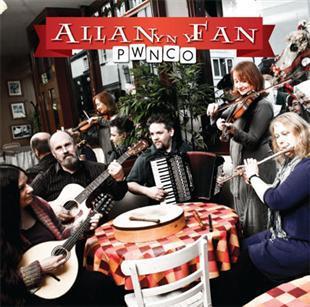 Allan Yn Y Fan hail from Wales, and Pwnco (their 5th studio album) is a varied collection of traditional Welsh tunes and songs with some self-penned tunes, all with a less than subtle hint of Celtic thrown in.

Pwnco is predominately made of tune sets, and the album opens with a happy and bouncy set of polkas. It’s evident that the band are all enjoying themselves immensely while playing and it gives each of the tune sets a massive uplift and as such a lot of them are great fun to listen to. That’s certainly evident in the Albanian Quickstep set, where the band end up singing the tune to finish it off instead of doing the logical thing and using their instruments.

But although they show how much pleasure they get from happy and bouncy pieces, there’s also a slow air played on whistle with a piano/guitar accompaniment which stands out amongst the rest because of how simple it is. It’s even better because the tracks around it are quite upbeat and the sudden shift in style just feels nice.

The Welsh singing feels conflicted in places. The second track (Canu Cwnsela) has a traditional song which has a really fun tune to listen to, but the unfamiliarity of the language detracts from the enjoyment.

There are some nice settings of Welsh Ballads, which have an operatic feel to them. The only issue is that although there’s all this musical space for Meriel to make a lot of the simple tune and story, nothing seems to happen so the telling just ends up being slightly flat because of it.

The ballad Tra Bo Dau highlights the niggling annoyance of wanting to understand what is being sung - although there are full lyrics and liner notes given, the language barrier prevents you feeling everything the song has to bring to you, though the melody gives a sense of something heart-wrenching.

The final track, Twinkle Twinkle, is fascinating. We’re all familiar with the first verse, but there’s a whole song which I certainly didn’t know existed, which was based on a poem published in 1806. The singing is fantastic in so many ways, and ending the album on an a cappella finish with crunchy harmony is perfect.

Unless you know AYYF’s style and like what they do, Pwnco is tricky to recommend. Although there are some brilliant and fun tune sets, the album struggles to bring a lot to the table that is enjoyable for all. It’s a real shame, because Meriel’s voice especially is quite astonishing to listen to but doesn’t seem to be given the right sort of songs to show her voice off to the full.