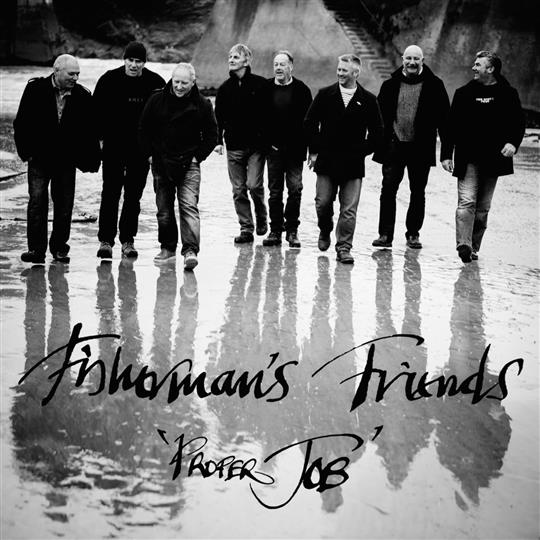 Not so long ago, the continued existence of Port Isaac’s own Fisherman’s Friends seemed far from a given. Personal tragedies and tough professional decisions had taken their toll. Thankfully, with the passage of time and some new members, they seem to have found a second wind and all the evidence suggests that they are back on form. An impromptu a capella set at Glastonbury last year, during a power outage, was particularly warmly-received.

Along with a welcome return to live shows comes their latest album release, Proper Job, once again with producer Rupert Christie. In an intriguing tie-in, the release is supported by St. Austell Brewery which, not at all coincidentally, produces an award-winning ale of the same name.

Given their almost pioneer status in re-popularising shanty singing, it’s no surprise that the familiarity of the group’s sound really leaps out here. Line-up changes - new members in and one retiree - only go to prove that an ensemble like this is far more than simply the sum of its parts. Those dense harmonies still fall so easily on the ear and these men sound as though they are revelling in the sheer pleasure of singing together.

As might be expected, there are seafaring standards here, like The Coast Of High Barbary and Santiana, plus a version of Donkey Riding that definitely isn’t the one taught at nursery school! If the group continues to bring these old songs into the awareness of new audiences who might not connect with this music otherwise, that is absolutely to be applauded.

The musical accompaniments on the album are generally sympathetic and effective, without being obtrusive, although there is the occasional surprise, such as the slight Jazz Age twist on Sugar In The Hold, which itself morphs unexpectedly into a burst of Hit The Road Jack at the end.

Fisherman’s Friends have weathered much and it’s a testament to them that their humour and integrity are still intact. This may not be a ground-breaking album, and it’s certainly no real substitute for seeing the group perform live, but it’s hugely enjoyable all the same.