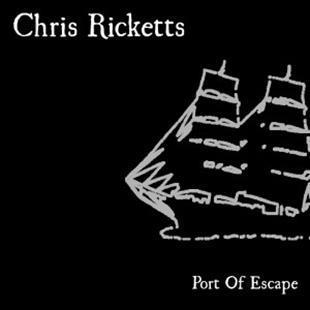 Port of Escape is the debut solo album from 2009 BBC Radio 2 Young Folk Award semi-finalist, shanty-singer Chris Ricketts. Choosing a largely well-known repertoire, Chris makes the traditional tracks his own with his than traditional arrangements.

Instantly recognisable, South Australia hits exactly right note from the first round of ’In South Australia I was born...’ With an added percussive thrust from an ever present drum kit, Chris’s arrangement holds the listener in thrall from the opening strains of a didgeridoo to his final chorus.

Chris has been equally brave with Haul Away Joe, combining a didgeridoo with a drum kit and a guitar, he claims the track as his own and stands his arrangement far from those of Spiers & Boden and Show of Hands. It’s a brave move, but one that pays dividends.

Some arrangements, however, don’t gel quite as well. At more than one point Spanish Ladies strays into ’soft rock’ territory and far from evoking images of the sea, the added seagull calls unfortunately just seem a little cheesy.

But it is Chris’s completely a cappella rendition of Northwest Passage which is the true highlight of the album. With no added bells or whistles, this solo track is refreshingly frank and heartfelt. With nothing to distract from his strong voice, there is time for the the listener to truly reflect on the tale of hardship that is being recounted.

This is an immensely impressive debut from a bright young talent and definitely one to keep your eye on in the future.

Released on Hobgoblin Records on 7 November 2011