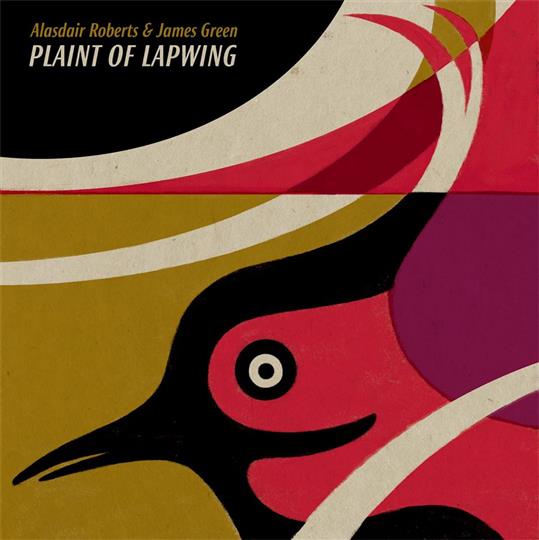 If you are seeking a listening experience which is traditional yet contemporary, familiar yet unique, warm yet challenging, Plaint of Lapwing is the album. Alasdair Roberts’ and James Green’s collaborative endeavour, created and honed over several years exchanging ideas and recordings between their respective Glasgow and Sheffield homes, has culminated in a unique album painting rich pictures and telling stories of myth, love, nature and wonder.

Roberts is a Scots singer/songwriter with an enduring solo career and wide-ranging collaborative works. Currently performing solo and with the Furrow Collective, his vocal style is rich in Scots dialect, earthy and authentic. James Green from Sheffield is the founding member of The Big Eyes Family Players. A talented multi-instrumentalist, Green plays harmoniflute, an old free reed keyboard instrument used to excellent effect.

This album brings together traditional and contemporary songs in progressive instrumental settings, but remains firmly rooted in tradition. All but three tracks are original Roberts’ compositions with depths and qualities that are progressively unveiled on each listening.

There are many great tracks however some particularly stand out. The upbeat rhythm of Anankë, a song about fate, mythology and reflection, is accentuated by Green’s accompaniment bringing a contemporary flavour, to what initially appears an old traditional song.

Likewise, title track Plaint of Lapwing has a strong Scottish traditional feel, which initially lulls the listener, until a more complex musical arrangement develops and the song reveals itself to be more contemporary in nature.

Hallowe’en is a memorable interpretation of the evocative ballad based upon Scottish poet Violet Jacob’s poem, written following her son’s death at the Somme. Keyboard and harmoniflute are arranged expertly complementing Roberts’ expressive vocals and leaving a lasting emotional impression.

Similarly, that moment between waking and sleeping is exquisitely captured in At the Mid Hour of Night, a gentle love song by Thomas Moore, arranged by Benjamin Britten. Instrumentation, vocals and harmonies create an enchanting, dreamlike experience.

Roberts’ skill in writing new songs which are both familiar and original is evident in Peacock Strut, a wistful tale of nature and virtue. Guitar and harmoniflute accompaniment is uncomplex yet effective.

The entrancing Ballad of the Speaking Heart holds the listener spellbound during Roberts gentle recounting of this macabre tale. Green’s instrumentation adding exquisite depth and texture to Hamish Henderson’s ballad.

Plaint of Lapwing is a truly original album occupying a space between traditional and contemporary, mythology and real life, awake and dreaming.

1. Anankë
2. Peacock Strut
3. At the Mid Hour of Night
4. If There is Any Light
5. The Evening is Growing Dim
6. The Left-Hand Man
7. Boy of Blazing Brow
8. Ballad of the Speaking Heart
9. Plaint of Lapwing
10. The Wronged Blacksmith
11. Hallowe’en