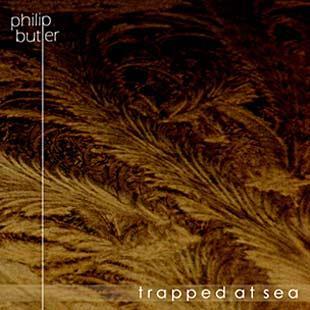 ’Trapped at Sea’ is the debut album from Malvern-based Philip Butler and several guest musicians including Tom Collison. Butler previously played in several indie and punk bands and this album represents a first foray into the folk world.

The style of the album is based around Butler’s acoustic guitar with added folk elements (mandolin, accordion) as well as harmonica, bouzouki and one or two other instruments, resulting in a complex, layered and highly original sound. As might be expected from an artist who has influences from so many musical genres, there is a lot of variation in style between the eleven songs, from the rock/punk influences in ’Raise a Flag’, the acoustic indie of ’Fly a Plane’ but also notably the traditional folk tracks on the theme of coastal erosion and flooding exemplified by ’Rising River’ and ’Save Us’. It’s these more folky songs which I found the most powerful.

The strongest lyrical theme of ’Trapped at Sea’ is a coastal one, with tracks about erosion and flooding expressing the resilience of coastal communities. This theme, together with the originality of the sound creates a contemplative album on the fringes of the folk scene. This is an interesting and engaging album which, while perhaps not for folk purists, would be a good choice as something a little different.