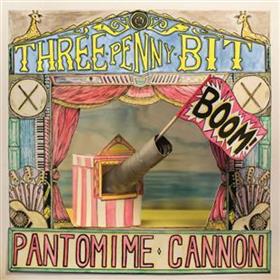 By their own admission Hampshire based eight-piece Threepenny Bit are looking to “raise a few eyebrows amongst the contemporary folk audience” on new album Pantomime Cannon. Frankly
they can consider it mission accomplished as this is about the most head-spinningly original album to emerge from the current crop of young folk collectives this year.

Despite being a mere four years old as a group Threepenny Bit have raised the bar yet again on album number three whilst opening their collective shoulders and throwing even more musical styles into an already overflowing pot. Noticeably the intensity of their live show is beginning to creep more and more into their recorded work bridging the gap between studio and stage to good effect.

Lancastrian favourite The Rochdale Coconut Dance is the first tune to show off the band’s extended versatility, starting off with a polka style opening before seguing effortlessly into subtle jazz stylings.

The sense of tradition is constantly at the forefront of the record though and the addition of jazz progressions, thumping percussion and even dub never detracts from the core of Threepenny Bit’s base sound.

The border regions are plundered for Go To Berwick, Johnnie, which has a fantastic story-telling quality about it. The tune is led majestically by flautists Jason Beaumont and Hannah Gray with further virtuosity coming in the shape of Ruth Burrows’ alto saxophone as it opens the fizzing pop sensibilities of Popcorn. It’s worth pointing out that Popcorn lands half way through the record and not once do the energy levels drop before or after it.

Forget nodding along approvingly, this is an all-out musical bombardment that will have even the most hardened wallflower up and dancing. Just try and sit still throughout the staccato drama of The Travelling Lemon as it sashays passionately into your brain with no small measure of Mediterranean flair.

It’s rousing, it’s charming, it’s ridiculously energetic and it is only sad that Pantomime Canon lands too late for the 2014 festival season. Make no bones about it though, Threepenny Bit will have fields, barns and halls full of people dancing to their tune up and down the UK in 2015 and beyond.