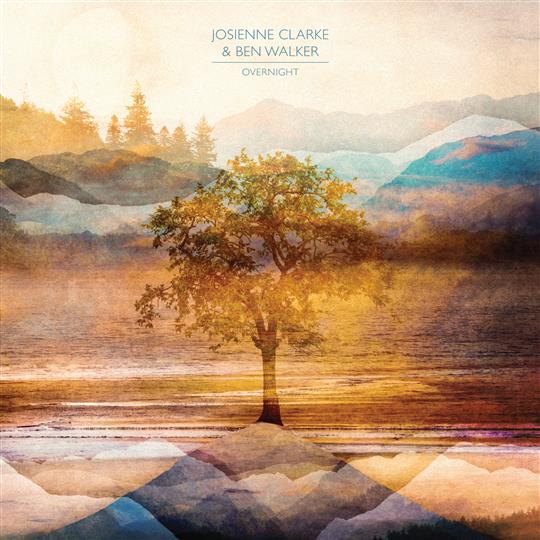 Overnight, Josienne Clarke & Ben Walker’s first full album on Rough Trade Records, is their fifth together. Continuing in a similar vein to 2014’s Nothing Can Bring Back The Hour, the album revolves around Clarke’s confessional songwriting, and Walker’s guitar playing and arrangements.

Sweet The Sorrow is a case in point. A wistful and restrained lovesong, the rich yet tasteful string scoring and pinched guitar gives it a refined quality.

More full-bodied is Dawn Of The Dark, where the brooding slow-march of the drums is counterposed to the soaring one-woman choir constructed in the studio. Double helpings of Clarke’s vocals again give an equally ethereal effect on The Light Of His Lamp, set against rippling impressionist piano and bleak two-note guitar.

With the album drawing on varied reference points, Clarke skilfully adjusts her manner of singing accordingly. There’s hints of country in her delivery on Something Familiar, the bearing of a classical soprano as she effortlessly reaches the high notes on Sleep, and a touch of Nancy Sinatra on The Waning Crescent.

There’s even a small amount of tasteful scat to go with the Stan Getz-esque sax on the touchingly understated Milk And Honey. But, crucially, she’s never in danger of slipping into crude pastiche, instead making the subtle changes that show an appreciation of the finer points of vocal technique rarely seen in this day and age.

And for all the craft of the arrangements and performances, there’s substance to the style. Whilst the extra instruments rarely fail to enhance the material, it is easy to see the songs working just as well with the onstage lineup of acoustic guitar and voice, thanks to the memorable and unforced melodies.

That said, Walker’s arrangements often dovetail beautifully with Clarke’s songwriting. The best example is the title track, where delicate strings and tentative guitar perfectly matches the early dawn setting of the lyrics.

Similarly, on Light Of Day the far off echoes of brass and strings are heard fleetingly, whilst sparse guitar and piano chords go round in circles, seeking but never finding resolution.

Absent from Overnight are any traditional songs, which in the past made up a considerable part of the duo’s repertoire. But anyone willing to listen with an open mind will be rewarded with a distinctive and finely-honed album.