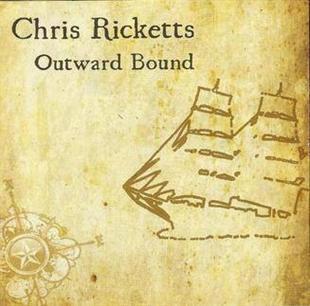 Chris Ricketts has reinvented the sea shanty genre in recent years, bringing a very traditional canon to a modern audience to growing acclaim. Following up from debut album Port of Escape and a semi-final position in the 2009 BBC Radio 2 Young Folk Awards, Outward Bound is his new release on Acoustic Fusion records.

The album continues to show the unique style and flair of Ricketts, with instantly recognisable standards such as What Shall We Do With the Drunken Sailor given a modern treatment while retaining the heart and soul of the original shanties. The sound is quite different and more intimate than that of the large shanty groups.

The musical influences on Outward Bound are as far flung as the ships on which they originated. Rollocking Randy Dandy-O has a pure bluegrass guitar backing to go with the shanty vocals, while Cape Cod Girls has a much more traditional feel, with fingerpicked guitar and fiddle fitting the pace of the shanty cadence.

The dreamy Polynesian song. John Kanaka is a rhythmic multi-layered vocal treat, while slave song Shallow Brown moves away from the call and response style and is full of emotion. New York Girls feels influenced by the energy of the Bellowhead version yet has a distinctive character of its own.

The biggest risk is taken with the inclusion of What Shall We Do With the Drunken Sailor, which could be somewhat over familiar. The version here gets away with this by adding a snappy fiddle and guitar backing.

Outward Bound is a varied and engaging album, entertaining and quite different from anything else out there.