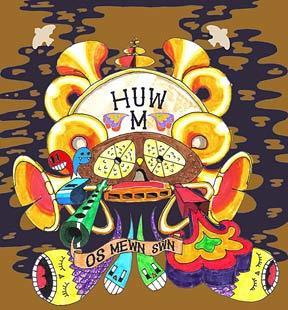 ’Os Mewn Swn’ is the debut album from Huw Meredydd Roberts, also known as ’Huw M’. The album is sung entirely in Welsh, with a title that translates as ’If in Noise’.

The overall sound is firmly in the ’folk-pop’ bracket, with acoustic guitar, keyboards and drums joining fiddle, ukelele and accordion.

The opening ’Hiraeth Mawr A Hiraeth is a lulling, soothing and hypnotic piece of music that its impossible to resist. The remaining tracks are a mix of traditional Welsh folk songs and original material, but the style is very consistent throughout.

Huw’s soft and engaging vocals are joined on several tracks by those of Bethan Reynolds, notably on the excellent duet ’Seddi Gwag’ which also features Bethan on clogs. The following track ’Gad Y Dirwnod Wrth Y Drws’ brings in some harmonica backing, with a resulting melody that had me humming along in no time.

The final track ’Michelle Michelle’ combines the traditional ’Cariad Cyntaf’ or ’first love’ with an original chorus to create a more upbeat sound that is no less successful.

’Os Mewn Swn’ is a beautiful collection of beguiling, feel-good folk-pop to brighten up your day.