Maz O’Connor - On Leaves Or On Sand 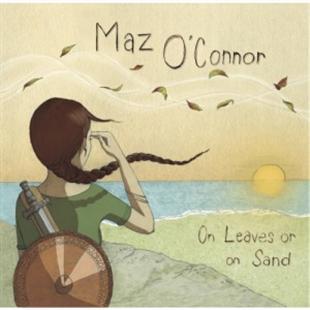 20-year old singer Maz O’Connor is no stranger to the festival circuit, having won her first festival competition at just 13. Yet, On Leaves Or On Sand is her debut EP.

The record starts with a Nick Drake cover, From the Morning. It’s a pleasant introduction, more upbeat than Drake’s version, but perhaps therefore missing a hint of his innate melancholy. The addition of glockenspiel really changes the tone from the original, but is a nice touch.

In contrast Fairy Song is an ethereal pleasure, Shruti box and Jim Molyneux’s (4Square) vibraphone combining to create the fairy magic. This song suits Maz’s voice better than From the Morning, providing more room for her singing, and overall a more pleasing effect.

Maz’s voice is her main feature. It isn’t as distinctive as some on the folk scene, but with it she is able to convey both childlike innocence and real experience with absolute credibility.

Some Tyrant, the third track of the EP is a tale of lost love, and the least noteworthy of the songs, though in this instance that is not to say it has nothing going for it.

So we end with Caw the Yows, which mixes a Robert Burns poem with the song that I know as The Disdainful Lady. It is the standout track of the EP, and has real musical depth and imagination.

It begins with more atmospheric music and some lovely harmony singing, creating quite an eerie effect. It then moves into an upbeat version of the courting song, with the woman refusing her suitor. Interestingly, Burns’ Caw the Yowes sees the lady accept the man’s advances! We then wind down to a gentle vocal finish of a beautiful song.

On Leaves Or On Sand is an exciting debut from Maz O’Connor, and even better, it shows that her strengths are with folk music rather than modern covers.