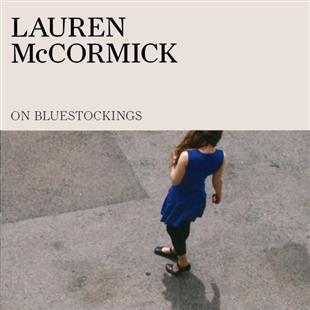 Lauren McCormick’s debut solo album, On Bluestockings, is an homage to its namesakes: ’They were rather modern for their time, replacing demure amusements with the delights of alcohol, tea and literary conversation. I admire their attitude that you can do what you want, whoever you are.’

Best known for her role in the trio Devil’s Interval with Jim Causley and Emily Portman, Lauren’s pure and true voice makes you stop and listen. Her musical versatility as she moves between arrangements of traditional folk songs, 1960s and more recent songs including her own compositions, shows that she can certainly do what she wants.

Supporting Lauren who sings and plays flute, are the Delarre brothers from Mawkin, James on violin and Dave on guitars, and Roz Gladstone on cello. The care and inventiveness of the arrangements and accompaniments gives these songs a strong and memorable base.

Lauren’s interpretations are reminsicent of other great female folk singers such as Judy Collins, because of the emotional depth and energy of her voice. She is equally at ease in acoustic settings, with the backing of guitar, and traditional settings supported also by strings and flute.

The album opens with A Game of Cards, a traditional song about a girl who knows what she wants, delivered with confidence. The next song, The Trees They Grow High, is an old favourite, that has been sung by so many. Yet Lauren manages to bring a new feel to it in her version.

Lauren sings Bob Dylan’s One Too Many Mornings so simply, without any affectations, and this brings back memories of Joan Baez. The strings give the song a completely different feel, with folk riffs interspersed in between the verses.

That is the beauty of this album, that her approach is authentic yet also original, and without overlay. The supporting musicians add texture yet enable the listener to experience the stories of the songs without interference. Everybody Knows is another modern folk song by Leonard Cohen which Lauren sings with gusto.

A Sprig of Thyme is a traditional song that might be her favourite, and it includes verses by Pop Maynard, Emily Portman and Jim Causley. Her a cappella delivery of both this song and a self-written song for her mother show the quality and intensity of her voice.

There are other fine traditional songs too, arranged by Lauren. One of the most striking is The Old Garden Gate where Lauren’s voice melds and interweaves beautifully with violin and cello.

There is also a lovely interpretation of Lady Isobel and an interesting version of the Bluebeard fairy tale, Lucy: Meaning Light. The album ends with the well-known song The Cuckoo in a new version by the Delarre brothers.

On Bluestockings has the simplicity and crafted care of a classic - don’t miss it.