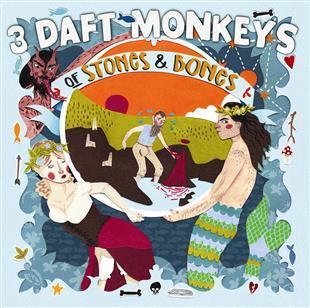 3 Daft Monkeys are a familiar name on the folk circuit so much excitement has surrounded the release of their new album Of Stones and Bones. The title suggests a nice juicy collection of tunes that should spark the imagination.

The album kick starts on a high note with Agnes the Giant Killer which is an amazing tale which the title explains pretty well. The tune is filled with energy and excitement, charged by a fast paced fiddle and guitar, as well as the vigorous vocals telling the tale of a giant loving a girl, who proceeds to kill him.

We get more folklore tales with Jenny and the Changeling which is all about the ancient stories of changelings who would kidnap children and replace with their own.

Some of the songs are silly and catchy like The Tale of the Laziest Pirate which will inevitably make you chuckle as well as dance around in your chair.

The musical arrangement of the group consists of a good balance, with vocals, strings, percussion and brass, giving a great variety with emphasis being shifted regularly throughout the album. The main pull factor of course is the stories of the songs. Each one is exciting, and slightly strange, but sung with a lot of feeling that can really reel the listener in. In particular World on its Head is fast, exciting and grabs your attention.

There are some definite musical influences, such as in The Lovers of Porthgwarra Cove, where the vocals become almost bluesy which works well over the dramatic background music.

The vocals are not all from one band member either; there is some swapping in the lead, with songs like Jenny and the Changeling being led by Athene Roberts. The vocals are tailored to each song, to match how best to pull the listener into the songs. We even get swapping vocals in the song Morwenna which works very well to generate a high strung atmosphere on the engaging tale.

The entire album is a continual flow of excitement and should be a staple for any music collection.

1. Agnes the Giant Killer
2. Sarah, the Devil and Jack
3. The Lovers of Porthgwarra Cove
4. Jenny and the Changeling
5. World on its Head
6. The Tale of the Laziest Pirate
7. Morwenna
8. The Pellars of Zennor
9. Reverend Hawker of Morwenstow
10. One and All
11. The Stranger