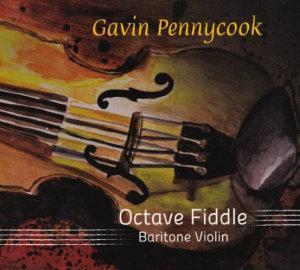 The Octave Fiddle or Baritone Violin is, says Gavin Pennycook in the notes to his new album, still an underground instrument. In Scotland, only a handful of fiddlers play the violin strung in this way. This new album, probably the first to showcase these strings, should change this situation.

It’s very easy to change a regular violin to an octave fiddle. The instrument is fitted with purpose-built octave strings which allow the violin to be played an octave down, in a range somewhere between a viola and a cello.

The sound an octave fiddle makes is difficult to describe. The strings give the notes a low raspy quality and make the sound feel quite earthy and ancient. Pennycook’s album shows off the full range of this dark and beguiling instrument.

The album is a collection of mostly traditional tunes collected from Scotland and Ireland. There are also pieces from England, Wales and Scandinavia along with tunes from the classical repertoire.

The CD gets off to a lively start with the Turlough O’Carolan favourite, Loftus Jones. Accompanied by Ewan McPherson on guitar, the octave violin gives the piece a gravitas that is absent in some other recordings. The tune is still lively, though, with some very nimble passage work that has echoes of classical music.

This connection to classical music is made explicit in the three tunes that Pennycook reworks from Beethoven, Grieg and Mozart. Rondo A La Turca is sprightly and very danceable. In the Hall of the Mountain King starts off slowly and gradually gets faster until it segues into the Für Elise Reel.

There is a small worry that these classical pieces could be seen as novelty items but Pennycook plays them such with style and élan that all doubts are soon forgotten.

Perhaps the standout piece on the album is a pair of Scandinavian tunes. Grannens Favourit (by Väsen violist, Mikael Marin) and Koukkulammin Polka (Otto Hotakainen). Here, the fiddle is in its element with Pennycook attacking both tunes with gusto, it’s a delightful reading.

The slower pieces work well too. The Kerrywoman’s Lament is particularly fine whilst Fyvie Castle’s mournful tune is played starkly on solo violin to great effect.

An album of tunes for solo octave fiddle (with minimal accompaniment) might sound like a daunting prospect for listeners. However, Pennycook has chosen his material well and ensures that the listener is never bored. This CD will not be to everyone’s taste but those who make the journey will be amply rewarded.