Green Diesel - Now Is The Time 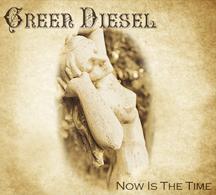 Now is the Time is the debut album from Kent based group Green Diesel, following their earlier EP release Kings at Sea. The album combines interpretations of traditional material with original compositions drawing on Kentish heritage.

This an album, first and foremost, of tremendous versatility. Many tracks have the intimate feel of a song around a campfire, particularly the opening Fire & Wine, which captures the spirit of a youthful night around a roaring fire superbly well.

In contrast, The General’s Lament packs a tragic and emotional punch while The Saga of John Ward is an upbeat piratical tale. The talents of the musicians are further showcased in the wonderfully named Roy’s Presbyterian Catharsis.

Folk rock elements are prominent throughout Now is the Time, reminiscent in places of The Levellers and Oysterband, with a sound that is fresh and highly engaging. This is an excellent debut from a group that are very easy to like.