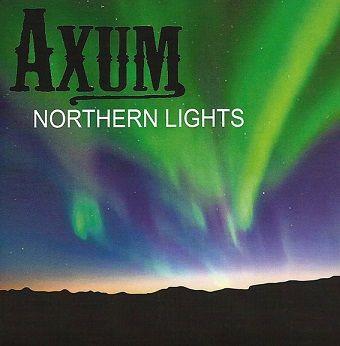 Axum are a vibrant eight piece band who met together at the Sage workshops at Gateshead. Northern Lights is deeply influenced by their northern roots, being a collection of stunning tunes from Northumbria, Scotland, Finland and Sweden.

Theirs is a full, wholesome sound with fiddles, accordion, guitar, mandolin, cello, double bass, low whistle and recorder blending together. Clever arrangements, counter-melodies and harmonies add to what is a unique and particularly enjoyable EP.

Taking a traditional Northumbrian lullaby and interpreting it with a degree of swing is quite bold, however this works so well in Bonny at Morn. A jazz-influenced double bass line opens the track which then winds and meanders, merging harmonies and counter melodies.

They bring spirit and vigour to two session favourites in Rusty Gulley / Reed House Rant. Again the harmonies and arrangements are such that the versatility and depth of this eight piece band are clearly evident.

Riippusillan Hambo is a Finnish dance tune interpreted as an air; an atmospheric piece that tantalisingly weaves in and out of minor and major. From Sweden, For Elise, is an excellent slow air, with cello taking the lead. Axum’s selection and interpretation of tunes successfully crosses cultures and borders.

Northern Lights is a fine EP, which admirably showcases Axum’s musical creativity and versatility. They take an adventurous approach to arranging and performing traditional music which is clever, considered and accomplished. Here’s hoping for more from this talented northern collective.