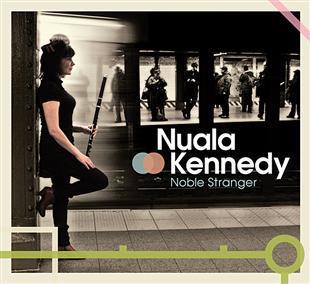 You know that feeling you sometimes get when you listen to an album, and you try to work out how it’s possible to not be happy while listening to it? Well, Noble Stranger, Nuala Kennedy’s third release, invokes that feeling. Like any good Celtic album should.

Nuala grew up on the East Coast of Ireland, but has recently been contributing to New York City’s neo-folk scene - something which shows in most, if not all, of the tracks. The style of neo-folk (a recent example for those who don’t know the genre might be Sam Lee’s debut album) can be "interesting" at times, but Nuala’s style of composition and arranging doesn’t make it difficult to listen to.

The melodies that Nuala is singing are contemplated by the band’s playing. Everything just fits together nicely, with a touch of modern composition thrown on top.

The opening track, for example, was inspired by a retro Casio keyboard. You read that right: a whole track inspired by a keyboard. So you end up with this eclectic mash up of a folk ballad Nuala wrote, surrounded by something approaching muzac. And you know what? It hits the spot.

There’s a selection of instrumentals as well, which range from slow airs to reels. Nuala’s flute playing is brilliant to listen to, and the band’s accompanying is just good fun. Asturias, a two track instrumental, ends with a tune that Nuala can basically show off in, with racing scales and the traditional Irish style of "I can play 40 notes in one second".

Of course, there are still some issues with the album. There’s one track where the vocal talents of AJ Roach are employed but although the idea behind the harmony is nice, it doesn’t quite come off. Why it does, it’s difficult to say, but it just feels like a nice idea that doesn’t completely work.

But it’s hard to care about any faults too much. The tracks are all great fun to listen to, easy to listen to in the background but also bringing plenty to the table if you are fully focused on what’s happening on each track.

This album makes you happy, even if you’re not a neo-folk fan. You’ll spend your time dancing along in your chair to the reels, or just sitting there with this ridiculous grin on your face without any real reason as to why it’s there. It just tickles you in the right place and for that reason alone, it can’t be recommended highly enough. Go and get it, you won’t be disappointed.