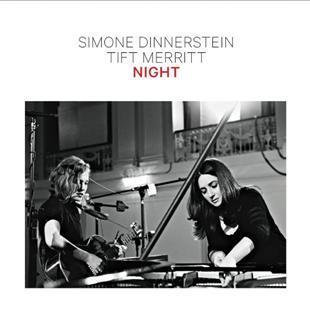 From across the pond, and recorded in New York itself, could Simone Dinnerstein and Tift Merritt have succeeded in convincing ’The City That Never Sleeps’ about the true importance of Night? The duo have been working on the album since 2010 and now the time has come for it to be released to audiences worldwide, sharing in the fascinating musical journey taken by the two artists.

Night is the product of an exciting new collaboration between Simone Dinnerstein and Tift Merritt with each bringing to the album a very specific and personal musical story. Simone is a trained classical pianist who had previously focused on playing written music by composers of hundreds of years ago. Quite the opposite, Tift is a folk guitarist, singer-songwriter and harmonica player who was taught to play by ear.

The two have flourished as a duo, each learning a lot about artistic expression and exploration through the other. This fusion of musical styles is very much a past meets present situation, throwing into doubt the real boundaries of each genre.

The album includes self-penned music and songs, the works of great classical composers, and of pop and rock legends. And yet despite the differences, each individual take on a piece of music by Simone and Tift makes for a well-balanced and varied combination of sound and style. The fact that Purcell and Johnny Nash can sit side by side on an album without either feeling out of place certainly suggests that Simone and Tift have created something rather special.

The self-composed element of the album presents to the listener beautifully simple but unusual melodies which have real depth and soul. Only in Songs, the first track, highlights straight away the remarkable talent to be enjoyed throughout the album. Powerful lyrics float across delicate guitar and piano chords creating an album that although relatively slow paced, is brimming with soul and passion.

Tift Merritt leads the singing - evoking a range of emotion with a voice soaked in American folk influences. Simone Dinnerstein, indeed a virtuoso pianist, is commendable both as a classical musician but equally as an artist whose expressive performances are able to balance and compliment the folk and rock components of the sound produced by the duo.

The arrangements are of key importance as they highlight the duo’s passion for and undeniable skill at shaping both pop classics and classical works around their own individual styles. A particularly striking example is the addition of the harmonica throughout the album - especially in Night and Dreams - which helps give the main melody and vocals a wistful edge.

It is certainly an album that cries out with originality and leaves the listener with not only a sweet sound in the ear, but a deeper understanding of the relationship between musical styles. Although a concept most people will not have come across before, it is one only to be embraced and certainly to be used to challenge our conceptions of how musical genres can work together.

Night, a sublime and dreamy combination of instrumentals and songs but by no means an album that will have you drifting off.