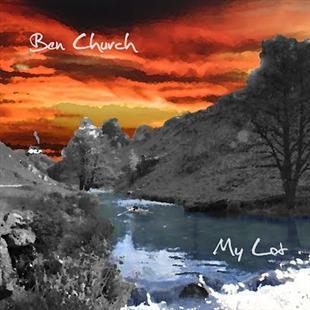 Ben Church’s EP My Lot is a sensitive mix of tracks whose inspirations are derived from traditional tunes, poetry, and original material. His percussive guitar playing - which is steady and serene - is paired with a sorrowful singing voice which makes for an EP which is immediately enjoyable. The simplicity of the melodies, harmonies, and lack of musical clutter make it incredibly accessible.

Church’s own track, Don’t You Ever, is a showcase of his own lyrical abilities and percussive guitar work - the cleanness and precision of which allow the lyrics to stand alone, and in this track these are lyrics which champion the importance of independence and freedom.

The guitar performance on Church’s re-working of the traditional track The Two Sisters uses the lower range of the instrument and is atmospherically darker without being stifling, an impression which adds to the bleaker subject matter of the lyrics.

Sorrows Away is contemplative, and continues to exhibit a simplicity of format which successfully emphasises the key importance of the substance of the lyrics rather than the musical accompaniment. This is a thematic idea which is carried through the EP - the lyrical aspect of each of the tracks is not an after-thought, but the crux of each recording, to which the instrumental accompaniment merely augments. This effortless minimalism allows easy and peaceful listening.

Church’s adaptation of John Masefield’s Sea Fever is the highlight of the album, sounding both traditional and fresh. It features a triple layering of sound of string, guitar and voice, which is mournful and slightly ghostly, whilst the movement of the guitar is reminiscent of the changing of the tide, and the intensity of the piece is artistically built up through the progression of the track. Exquisitely engineered.

The final track, The Parting Glass is a traditional Irish song, which has experienced countless re-workings. Being used to The Dubliners and Liam Clancy’s renditions of this fabulous song it was fascinating to hear a version which created a sense of greater solemnity. Instead of bidding farewell to a company of friends, Church’s less gruff voice creates the sense of a regretful lament of a love which has been lost forever, providing a beautiful and poignant end to a delicate and soulful EP.

Elegant, quietly intricate, and mournful, this EP is easy-listening traditional folk music at its best. Ben Church’s simple style may not make it the first port of call for music for a party but if you’re looking for something relaxing and fresh, you would be hard pressed to find anything as soothing as this.