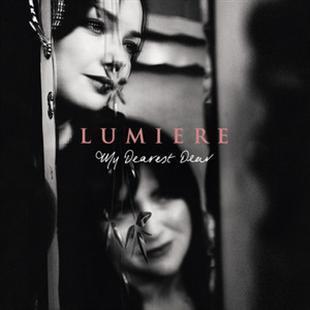 My Dearest Dear is the second album of fresh new duo Lumiere. This pair of Irish singers stars the dynamic Éilís Kennedy and the talented Pauline Scanlon who both originate from Dingle in County Kerry.

This album works to be distinctive from their debut album but still building on that original framework, adding extra levels to the foundation they have already created.

The album kicks off with the title track My Dearest Dear and hits us with a powerfully harmonic classic love song which even though it has a soft tune still immediately strikes us. We get our first taste of how sturdy this pairing is when they work together.

Lumiere have fantastic skills in the art of storytelling. The entire album is a collation of different tales, some historical, others comparable to the kind of tales a mother would tell a child. A particularly good example of this is The Wind That Shakes the Barley which again highlights the perfect compatability of these two voices, soothing us throughout the entire track. Another great example is The Queen and the Soldier which tells us a potent story full of great imagery almost painted to us by their voices.

The album has a good variety of instruments to support the vocals, giving us gentle guitar tunes and tender violin settings working to fully immerse the listener into the feeling of the music, we even get a good bumpy drum background in The Silver Tassie.

Even slightly more solemn tunes such as Who Knows Where the Times Goes fill us with some joy. This particular tune has the added vocals of Sínead O’Connor which fits in perfectly with Lumiere as if she is part of the same jigsaw, but still adding extra zest to this particular track and helping to blast us with a powerful peak.

In Ye Jacobites we get a hypnotic piano intro helping to set the scene as Lumiere give us one of their historical narrative interpretations of a traditional tale. This gives us an interesting contrast with the other main historical adaptation of the album which is the finale of The Streets of Derry.

That begins with a good guitar plucking before settling into the almost whispering vocals of the track. Interestingly it takes a much faster turn half way through and gives us a quick drum beat just to help liven it up for the last dose.

We do get three tracks sung in the native Irish language, each one giving a great mix of sounds and images which help to keep the album blended. Each of these tracks are as varied in sound and tempo as the whole album and have the same diversity in themes.

Overall this album is a pleasure to listen to particularly when wrapped up in front of the fireplace on a cold winter night.

1. My Dearest Dear
2. Bó Na Leathadhairce
3. The Wind That Shakes the Barley
4. Cailín Deas Crúte Na Mbó
5. The Silver Tassie
6. Who Knows Where the Time Goes
7. Ye Jacobites
8. Samhradh
9. The Queen and the Solider
10. The Streets of Derry