The Crooked Fiddle Band - Moving Pieces Of The Sea 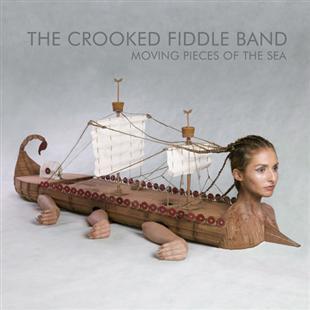 Based in Sydney, Australia and together since 2006, The Crooked Fiddle Band are a tricky one to categorise. On occasions they have described themselves as ’chainsaw folk’, their sound being an eccentric hybrid bringing together what others have described as ranging from ’whirlwind gypsy’ to ’thrash folk’.

Arming themselves not only with standard instruments, but also with the likes of guizuki, cittern, bass marimba and kalimba, and recording and mastering the album in the USA, the new album is a work of truly international proportion.

It’s a 1963 quote from Jacques Cousteau which gives the inspiration for the opening track, The Vanishing Shapes Of A Better World; he talks of “twilight turning into sheer darkness, the fish were just moving pieces of the sea” and the instrumental provides a soundtrack which brings his vision to life with its building cascade and rhythms.

Coming across as something not dissimilar to the splendid music being produced by the UK’s Lau and The Urban Folk Quartet with their sense of dynamics, the band aren’t averse to throwing in some typically progressive changes of mood and tempo in the middle of a piece. The song Puncture rumbles along gently and encapsulates what The Crooked Fiddle Band are all about in four minutes (even ending with a short drum break).

Neptune’s Fool is the piece which provides some further ammunition for the ’gypsy folk’ label with what sounds like the fury of Neptune himself making an impact from the outset - perhaps the track which takes the ’most notes per minute’ award!

Alongside the shorter pieces, the band get to show what they can do with two lengthier workouts. Of the two extended pieces, the strangely titled The Twin Peaks, And The Other Peak, Of Kilimanjaro goes through an exciting and dramatic middle section before coasting out with a lighter moment, while the lengthier part 2 of The Deepwater Drownings passes through almost classical sections of feverish fiddling and percussion before Jess Randall’s vocals calm things down and move into a pastoral passage. It slowly develops into a fury of instruments before an eastern flavoured part with some vocal intoning sees the track out after an onslaught on the senses.

Their second full length album after 2008’s Full Grown Tales, Moving Pieces Of The Sea seems to have cemented the band’s position as a quirky, uncompromising and outlandish outfit.

The album was recorded in Chicago during January 2013 and released in Australia through Birdsrobe Records.