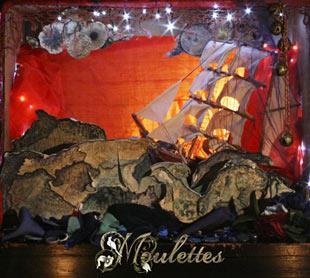 Its rare to see an album of quite such brilliant inventiveness as this self-titled collection by ’Moulettes’.

Based around strings, drums and voices in harmony, this is a bewitching debut. The overarching theme is magic, alchemy, witchcraft, mystery and the traditional cheery folk themes of murder and cannibalism.

Always difficult to pigeonhole, the sound is characterised by classical sounding strings and spooky vocals, which are transformed moments later when the upbeat, jazzy percussion or swing kicks in.

The opening track ’Recipe for Alchemy’ is an atmospheric number with the chorus of ’Oh, how the hounds are howling’ where Leach and Miller’s voices evocatively bring to mind stories of dark nights on the moor interspersed with jazzy, swinging backing.

Other highlights include the macabre tale of “Bloodshed in the Woodshed” with its echoes of Billy Joel and rapid changes of pace, the Romany influenced ’Cannibal Song’ and the twisted romance of ’Devil of Mine’.

The final track, ’Going a’ Gathering’ features swing, a capella vocals and the kazoo. However dark the subject matter, the musical treatment leaves a smile on the listener’s face and a strong urge to dance.

No two songs are quite alike, making the album very engaging. After a wild ride through jazz, swing, classical and dancing numbers, its impressive that there is still a strong continuity and flow to the music.

A highly recommended album, probably unlike anything else you will hear this year.

Released 31 May 2010 on Balling the Jack records