Yvonne Lyon - More Than Mine 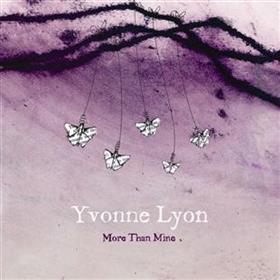 Yvonne Lyon’s new album, More than Mine, focuses firmly on her lovely voice and songwriting and piano skills. This is a delightful set of songs to listen to, with poetic lyrics that hint at hidden depths. It’s another step on for the singer-songwriter, whose previous album Ashes & Gold was a critics’ favourite.

The new album is predominantly Lyon’s own compositions, but she includes a treatment of Burns’ Ae Fond Kiss. This is a standard, but Lyon’s soaring voice does it justice. The sentiments of that song fit well with this introspective set of songs.

The arrangements are very simple; that approach works well to highlight Lyon’s voice and the well-turned lyrics. Graeme Duffin and Sandy Jones share producer credits here. A single Gaelic vocal from Fiona J Mackenzie, on Farewell, provides a slight contrast, and other instruments are brought in occasionally to add to the overall tonal feel, as with the guitar on title track More than Mine.

Her keyboard arrangements on Hope and Enjoy Not Endure are reminiscent of US songster Vienna Teng; other tracks are much more solidly rooted in the Scottish folk tradition. Occasionally, as with All is Well, she moves more directly to address issues of faith; both the subject and the treatment are hymnal.

Overall this album is well worth checking out by fans of singers such as Kathryn Roberts or Cara Dillon.