Up In The Air - Moonshine 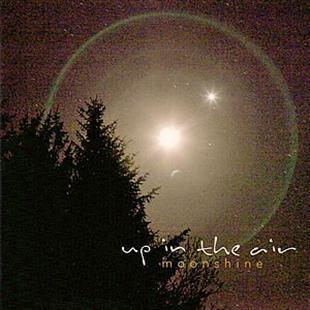 Moonshine is the long-awaited follow up to The Blue Lamp and Up In The Air from the trio made up of Jonny Hardie, Gavin Marwick and Davy Cattanach. The album mainly consists of tunes from the Scottish tradition, with the addition of three original songs by Cattanach and a version of Peter Stott’s Woe Is Me.

The trio are fantastic musicians, with some beautiful violin lilts in the slow air Braighe Lochall and the combination of the two fiddles in The Diamond Reel. However, unfortunately the album is somewhat lacking in variation; the tunes are often of a similar structure and are missing that extra bit of excitement that is hinted at in The Diamond Reel/Fair Fa’ the Minstrel but never quite followed through on.

Cattanach’s songs Today and The Witch of Findrack are the stronger two songs on the album, with some great vocal harmonies. Today especially has a pleasantly reflective quality to it, with the violin pizzicato and guitar rhythms creating a gentle accompaniment which provides an interesting contrast to the other tracks on the album.

Those who like their folk music to be simply arranged and kept true to tradition will no doubt enjoy this album, however others may find it needs a little more excitement and variation.

Up In The Air discography