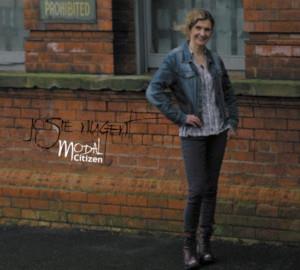 In her debut solo release, Modal Citizen, Josie Nugent has put together a pleasant yet mismatched collection of tunes both old and new. Nugent is obviously a talented performer and writer, however some of the pieces sit together uncomfortably, the sudden change in musical style jarring rather than encouraging one to explore the different styles and genres.

Taken individually though, there are many fine pieces in Nugent’s album to commend.
It opens strongly, with a set of slip jigs that alternates between the airy and bright A Cambridge Cycle, the darker Chesterton Meadows, and then back again to the cheery Warkworth House Tea Party. The three tunes (all original compositions) are refreshing in their simplicity.

They’re matched by the subsequent Reels Eibhlin & Caoimhín and Droichid Dhoire (The Bridges of Derry), which give full focus to Nugent’s fiddle, whilst flute, pipes, guitar and Bodhran provide subtle but welcome support.

The third track, Modal Citizen, is where Nugent suddenly departs from the album’s Irish roots. It’s an interesting piece, sombre, moody, and evoking classical compositions as much as folk, albeit with the unmistakable sound of a Rhodes electric piano. Éadan Doire (At the Brow of the Oak Grove) and First Flight are similar. The Rhodes piano gives them a dreamlike quality, but their interspersion amongst much more traditional pieces leaves you thinking more about the differences than the music itself.

The traditional style tunes in question are largely enjoyable. Reel for Martin McIntyre and Reel for Finbar McLaughlin are rousing, light-hearted fun, and Down to Upsalla combines flute, fiddle and pipes with a Scandinavian twist.

The album finishes with a collection of jigs and reels, mainly traditional but also with a few originals. The live recording of Jimmy Doyle’s Barndances has the wonderful depth provided by multiple fiddlers playing in unison, along with a certain rich acoustic that only a live performance gives. Mary Nugent’s enchanting flute playing on Matt Nugent’s Favourite and Jig for Francie Cahill is also noteworthy.

Modal Citizen, as an album, is OK. Which is a shame, because it should be good. Unfortunately, the bold choice to combine enjoyable Irish folk with thought-provoking compositions doesn’t quite work out. However, if Nugent can just bring greater focus to her next album, her solo career should have a promising future.