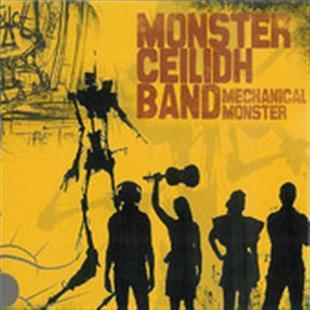 Monster Ceilidh Band’s second album sees them creating a monster indeed, a double album of 17 tracks encompassing both their standard sound, and the new electro sound of The Monsters Vs. The Touch.

The sound of the band without the electro additions is reminiscent in some ways of Lau. There is a lot of playfulness and slightly unexpected and innovative turns to the tunes, and a high level of musicianship.

Certainly the ’standard’ Monster Ceilidh Band is a force to be reckoned with (and danced to). In particular Carrot has an incredibly infectious catch, worthy of repeated listening.

However, the real excitement of Mechanical Monster is the second disc, unveiling The Monsters Vs. The Touch. Three tracks from the first disc are repeated, providing easy comparison, accompanied by six fresh tracks.

On first listening, the differences between the two versions of Red Monster, Red Jack and Witches appeared subtle, but they are there, and do create a different flavour to the tunes.

The inclusion of more strident bass in places, alongside percussion and electronic effects (and more) provides greater drive. It encourages both ceilidh dancing and general dancing - these tunes transcend the categorisation of folk dance music.

Islay Eye and Magic Pepper are raucous, maddening, rapid, fantastic. Proggit brings the tempo back, building from a gentle start to a rolling, hypnotic finale.

The marriage of energetic ceilidh music with electro sounds and beats is a huge success. It seems certain that a live show would be frenetic and dynamic, but Monster Ceilidh Band have succeeded, on both discs, to relay that energy onto a recording. No mean feat!