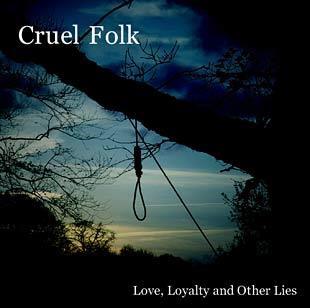 Love, Loyalty and Other Lies is the debut album from ’Cruel Folk’, a duo comprising Paul and Sean Holden. Both of the brothers were previously involved in heavy metal and rock bands, in particular ’Underground Zero’ before, as they put it, ’seeing the acoustic light’ at the Cambridge Folk Festival.

The album is made up of well-written songs, the stories driven by powerful, passionate vocals (the influences from heavy metal are most apparent here), from Sean Holden and sparse but highly effective accompaniment on a wide variety of guitars, mandicello, 12 string octave guitar, mandolin and bouzouki.

The subject matter is as splendidly gloomy as the name of the album and the cover art (featuring a hangman’s noose) would suggest. All the tracks are original compositions, but impressively, many sound as though they could be established standards, so well do they fit into the English folk tradition.

Cruel Folk have a keen eye for the historical, casting their eye over the Battle of Towton in the Wars of the Roses (Merrie England), Anglo-Scots border warfare (Before I Walk Away) and 18th century thievery and hanging (What’s Done is Done). The songs are uncompromising, with no glimpse of a happy ending and Cruel Folk have a real talent for putting themselves and their listeners into the shoes of the unfortunate protagonists.

The standout tracks are ’For the Cause’, a moving and brutally honest view into the mind of a ’freedom fighter/terrorist’, ’Foreign Lands’ which has a fine, catchy singalong chorus and ’Cold Blood’ with its subtle and evolving description of the fate of an informer. ’Worst Nightmare’ stands in complete contrast to the rest of the album, being a comic and downright filthy depiction of the horrors of dreaming of one’s ex wife. Its very entertaining, but could suffer from repeat listening.

Rounding out the album is the excellent ’The Greenwood Tree’ featuring Jude Merryweather on backing vocals and paining a haunting (literally) picture of romance, pregnancy, murder and ghostly revenge.

’Love, Loyalty and Other Lies’ is a fantastic and thought provoking debut album from a duo with a bright future in the folk world.