White Star Line Up - Look Out! 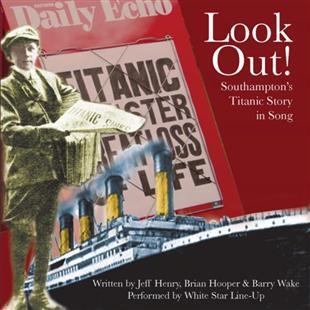 As part of the anniversary of the sinking of the Titanic, the themed album Look Out! has been produced with the aim of representing the experiences of the people of Southampton in that great maritime disaster. The album is the work of the White Star Line Up, made up of ten local musicians from the Hampshire region with tracks written by Jeff Henry, Brian Hooper and Barry Wake.

The writers aim to tell the story from the point of view of a wide range of Southampton characters, beginning with seamen suffering hard times in the port (the lively The Workhouse Instead), followed by the excitement of work being available on the doomed ship in Jobs for the Boys. The lives of the crew are nicely detailed, from the superb shanty 21 knots picturing the lives of stokers deep in the engine room, to late night duty in Whiskers Round the Light.

Interestingly, the material does not dwell for long on the disaster itself, but is much more focused on the social history surrounding it. White Star describes the inquiry into the sinking and the bitterness towards the shipping line that many blamed for it. Several tracks including Master at Arms and An Ordinary Bloke take inspiration from the lives of the survivors and the way in which the disaster continued to touch their lives many years later. Finally, Tears of the Angel and April in Southampton touch on issues of remembrance and the long lasting effects upon Southampton itself.

Look Out! is a great example of a focused and evocative set of songs bringing to life characters and situations beyond those usually featuring in documentaries or books about the Titanic.