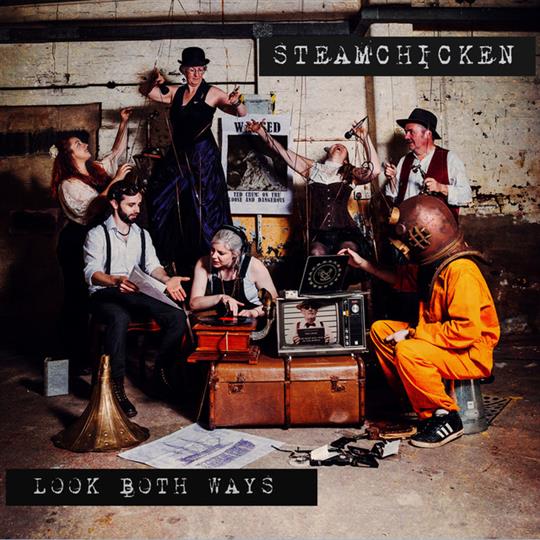 What do you do when you’re passionate about two different genres of music? The answer, if you’re Steamchicken, is to be in a band that lets you do both.

Over the last two decades Steamchicken have somehow carved a niche for themselves as a ceilidh band who also do a tidy line in Dixieland jazz. With the recent addition of singer Amy Kakoura to their constantly evolving lineup, Look Both Ways sees the band expanding into new musical territory.

Unsurprisingly, the album makes extensive use of Kakoura’s gutsy and blues-tinged vocals. On negro spiritual Jericho, these are matched in intensity by the surging breakbeat on Joe Crum’s drumming, which feels like it could replicate the biblical feat of tearing the city walls down.

A more gentle approach is taken on Brigg Fair and Gypsies, which together form probably the most convincing attempt yet at marrying English folk song and ambient dubstep. This is not just down to the solidity of the rhythm section in providing down tempo but not leaden beats, but also the well-considered use of the band’s four piece horn section.

The latter is in evidence throughout Look Both Ways, with the zing and zip of the three saxes and trumpet on Oh Mary sounding as if they could have been lifted straight off a Seventies reggae dubplate.

The band’s take on When I Get Low I Get High and original number Big Tin Horn both give a nod to the emerging electro-swing scene with their jerky rhythms, and the band’s background in playing for dances.

The latter features the polka Pride of Petravore transformed into a swinging Mardi-Gras number by the horns, in an example of the fun that can be had when traditional tunes are arranged for (ostensibly) “non-folk” instruments.

Whilst the above is the closest that Look Both Ways gets to directly marrying up the folk and jazz strands of the band’s repertoire, neither does the album feel disjointed in moving between the two. What ties it together is its balance between a high level of musicianship and a sense of zest and enjoyment of the music.

With pigeonholing Steamchicken’s music a difficult task, it seems like the easiest option is to simply give in and dance.