Jess Cahill - Long Time Have I Been Waiting 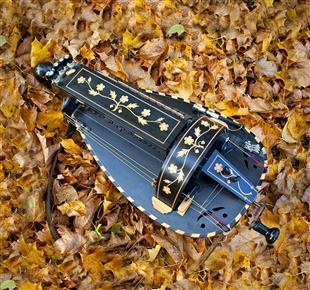 On this, her self-published debut album, Jess Cahill makes a fairly convincing case that the hurdy-gurdy - often reduced to mere seasoning on folk records - can form part of the main dish.

Don’t worry too much if you aren’t a devotee of the instrument: only three of the eleven tracks are unadulterated wheel-fiddle. They showcase what most of us probably think of as hurdy-gurdy music: the clicking keys, the drone, strong rhythms - a bagpipe cross-bred with a melodeon.

Based on traditional French tunes, they have a wonderful antique, alien feel, which Cahill carries off with aplomb on the first track, Mon habit n’a’qu’un bouton. Despite taking quite a long time to get to the actual tune, it turns out to be quite a catchy piece.

A whole album in this vein might have been wearing. Happily, the other tracks combine the harsh, twanging tone of the star instrument with gentler sounds - a mandolin, a melodeon and especially Cahill’s own voice.

For much of the stand-out track, Cold Blows the Wind (“I never had but one true love”), the instrument largely provides the drone, while Cahill’s voice, which is sweet to the point of being winsome, is allowed to speak for itself. The sounds of rainfall add another layer to the track: the album was recorded in Jess’s kitchen and the sounds that came in through the back door were incorporated into the final product.

Perhaps the final track, the epic Entry into Rain, takes this approach a little too far - a complicated soundscape with drums, wind and birdsong, but perhaps not enough actual melody. It may appeal to people who like their folk hyphenated, but the unfamiliar, harsh, authentic strangeness of the solo tracks, and the multi-layered Pentangle-ish vibe of the the sung pieces, are more enjoyable.

A dauntingly impressive debut, then, and certainly the best hurdy-gurdy album in my collection.