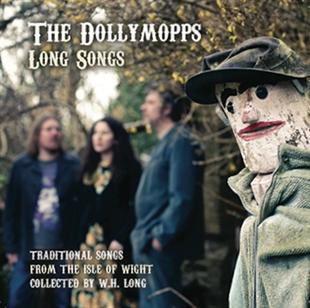 Isle of Wight natives The Dollymopps’ debut CD is a set of songs collected by fellow islander WH Long during the nineteenth century.

Published as an appendix to his dialect dictionary of 1886, this selection of the original 55 songs reveals the Isle to be a rich source.
Virgil Philpott, Dorana Philpott and Justin Smith sing characterful three-part harmonies with vigorous heart and an obvious rapport. There are hints of Coope, Boyes and Simpson and Blue Murder in the group’s easy warmth.

Collected on the Isle of Wight they may be, but there are plenty of familiar songs, such as Turpin Hero, mixed in with the south coast rarities. Highlights include a well-paced Rambling Sailor, Doranna’s lively solo spot I’m in Haste and the tragic ship-sinking tale of The Loss of the Ramillies, which is driven along with sprightly guitar and percussion. Virgil’s instrumental version of I’m in Haste showcases his considerable guitar skills further still, brief though it is.

Though at 17 tracks it’s quite a marathon listen, Long Songs does a great job in lifting the music from the dusty pages of the dictionary. An enjoyable document of Long’s labours, and an apt celebration of the Isle.

Released on Rattletrap Records in 2011.