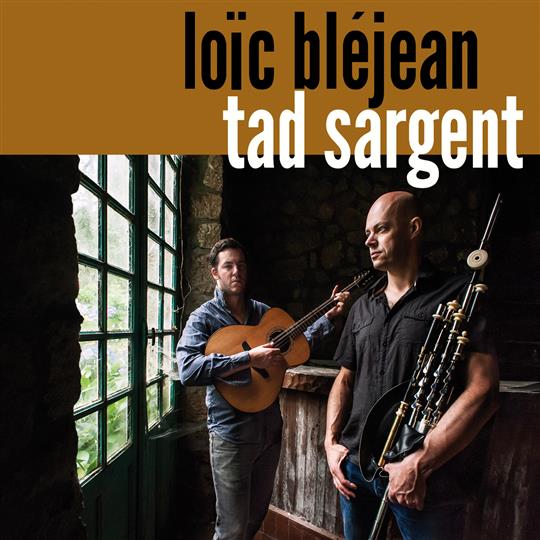 This album is an interesting hybrid from two respected sidesmen stepping up to the fore. Between Blejean’s uilleann pipes and low whistles and Sargent on the bodhran and bouzouki, the cross channel combination sees the pair coming together with their common love of the sounds of traditional Irish music.

They’ve given it a thorough reworking, emerging with fresh melodies and some interesting passages which can’t really fail to evoke a response from even the staunchest of armchair dancers.

There are nine tracks, which include six tunes sets, all of which are a mesmerising blend ranging from high-intensity and rapid tempos to the more calm and reflective. The album has a plentiful supply of reels and jigs which send the jiggery folkery needle dancing into the red, aside from the more tranquil and reserved, possibly even dreamy and pastoral.

All tracks draw on the traditional, plus a healthy offering of covers, most notably taking on Richard Thompson’s Beeswing, which is a bold move as against Thompson the odds are never stacked in your favour.

Talking of ambition and dipping into the tune books of the masters, Michael McGoldricks’ Trip To Herve’s also weaves its way into the Fanch’s Cider set - a perfect example of how the duo are able to combine individual tunes into more thrilling sets.

Irish Rendez Vous sets the tone with a set of traditional jigs establishing a strong Irish flavour which naturally pervades the set. The Blejean pipes feature heavily before the contrast with the song-orientated Missing You from the Jimmy McCarthy songbook, with a more contemporary and foreboding lyric.

The intriguingly-titled Dunnes Stores Girl from John Spillane (going to show that inspiration can strike anywhere) contains the first of a couple of retro Hammond organ contributions from Jean-Baptiste Bocle (don’t worry, he doesn’t go all prog rock) in a song that like the earlier Missing You, combines the guitar and whistles in a balanced manner.

At its best though, the album is a class above in some staggeringly-played reel sets, yet there may be some who may feel that there’s an element of pushing the patience with the pipes carrying the tunes and very much to the fore.

Having said that, just when you feel you might be all piped out, the combination of reels in Reeling In Colman, which closes the album, is one which has a reinvigorating effect. This is an album which slowly emerges as a travelogue soundtrack perfection.