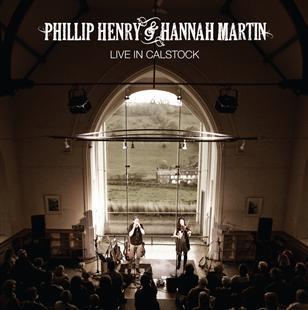 There is a growing popularity for songs being recorded live on location rather than simply in a studio and most musicians will agree that it helps to capture a sense of atmosphere and acoustics that simply aren’t possible in a recording booth.

Philip Henry and Hannah Martin’s latest album Live in Calstock is a prime example of why this is a good move for artists and how it really helps to capture new elements to music. Philip and Hannah bring us a good spread of different folk tracks, some recognisable, others less so, but all infused with that little extra spark from the recording method.

The album is a big mix tunes and songs that work together to create a great balance. Their song interpretations make for a breath of fresh air. Songs such as Death and the Lady are given whole new leases of life and appear like new songs inspired by old ones.

There is a good mix of tempos on the album with slow almost smothering moments and other tracks like Stones being faster paced and running along with you.

The hearty applause after each song helps to develop the atmosphere. It adds to the enjoyment of the listener, being appreciative rather than raucous and distracting.

The harmonica playing in Underground Railroad is excellent and demonstrates Philip’s skill, especially as it is a thrilling quick tune that doesn’t even sound as though it would be possible on the harmonica. The real charm of this particular tune is of course how the noises of the train going through its adventure are made.

Philip and Hannah have produced a very enjoyable album, with a good mix of sounds, producing something that is fresh and new.