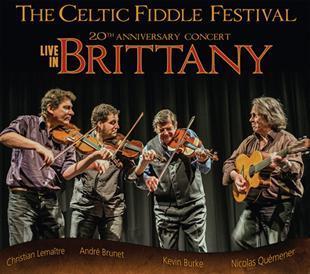 The Celtic Fiddle Festival are in fine form with their new album, Live in Brittany, which celebrates their 20th anniversary. The current trio of fiddlers include Kevin Burke from Ireland, Christian Lemaitre from Brittany, and Andre Brunet from Quebec.

It’s an interesting mix of players and they meld together the three traditions they represent into a unique blend. Their Breton guitar accompanist, Nicolas Quemener, adds yet another dimension to the music.

Each piece on the album opens up a different world. The opening piece is eclectic, a set of Swing Gavottes, bringing together dance music of two centuries and several countries. It has a regal flavour to it. Fiddles playing in unison create resonance and depth. Three of the tunes were composed by 20th century jazz accordionist Yves Menez, and the fourth is a gavotte version of a Romanian hora.

From here the trio move to a set of traditional Irish tunes, creating the sound and pace of travel in the first tune called The Trip to Durrow. These tunes are followed by a reflective and lyrical piece composed by Andre Brunet, Quand Soufflent les Anges, where the fiddle is sympathetically supported by guitar.

These three fiddlers each have a slightly different timbre to their playing, which combines well and yet also sounds individually distinct. Within a single piece the listener can hear the subtle nuance as the main tune is passed from one to the next.

There are Breton dance tunes, new and old, some lively and some more reflective. Also featured are new Irish compositions - Soggy’s/Waterboogie - with a country lilt and a traditional flavour. There is a particularly strong rendition of The Hop Down Reel designed to get feet and fingers moving.

Nearly every type of dance can be found on Live in Brittany: jigs, hornpipes, and reels played for square dances in Quebec. To end with, the trio play a Station Master’s Waltz, an appropriate finale: "A thought for the station master who oversees the wellbeing of his passengers as they embark on their journeys. Year after year, without ever leaving, he sees many travellers come and go. Will he decide to take the train one day?"

Live in Brittany is an altogether pleasing listening experience which captures the immediacy of being there at these finely tuned, compelling live performances. There is something on offer to satisfy every listener’s taste. This is a band with more than enough life in them to go on for another 20 years.