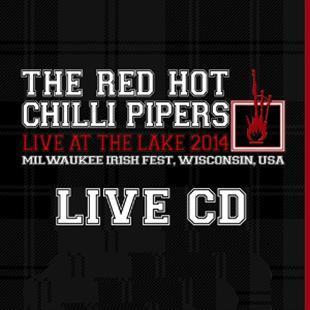 For over a decade now, the Red Hot Chilli Pipers have been successfully working their unique musical groove. Their sound, known as “bagrock”, fuses the energies of bagpipes and rock band, enhanced by the occasional brass section. The band’s loyal following, particularly in the USA, comes as much from their energetic live performances as from their exceptional musical talent, both amply showcased in this live double CD.

There is a mix here of classic rock crowd-pleasers - Don’t Stop Believing, We Will Rock You and Smoke On The Water, to name but a few - as well as newer stadium favourites by the likes of Coldplay, Kings Of Leon and Snow Patrol.

For a change of pace, Black Cherry’s Low Rider funks things up a notch, but it’s still hard to imagine any other band that would have thought of adding bagpipes to Avicii’s club hit Everybody Dance Now. More traditional airs, including 100 Pipers, Silver Spear and Little Cascade are worked into the mix but even “trad arr.” gets the full bagrock treatment.

Tracks frequently involve inventive mash-ups of diverse songs and musical genres, such as the interweaving of rock anthem Long Way To The Top with Scottish standard Old Hag At The Churn and Mary-Ann MacKinnon’s Steam Train To Mallaig. The band moves fluidly and seamlessly between rock/pop and more traditional material.

These top-notch musicians push the bagpipes firmly outside their traditional comfort zone, placing them proudly and firmly centre stage. A jazzy Amazing Grace starts out with bagpipe notes that bend and slur in some very improbable ways, constantly nudging at preconceptions of what it’s possible for bagpipes to do. There’s evidently huge skill involved in the playing and some exceedingly nimble finger work in the faster passages. Most importantly of all, there’s an enormous sense of fun to the whole proceedings.

This double CD, recorded live at the Milwaukee Irish Fest 2014 on the shores of Lake Michigan, packages up all the band’s best-loved tunes. It captures all the fervour, energy and rumbunctious enthusiasm of the band’s live performance - which is surely at the heart of what this band is all about.