Lorraine Mccauley & The Borderlands - Light In The Darkest Corners 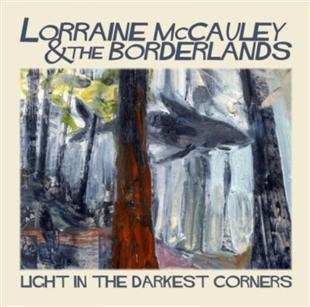 Donegal-born Lorraine McCauley’s debut album, Light In The Darkest Corners gives a selection of self-penned songs, all sung in a style reminiscant of Suzanne Vega. Not that that’s ever a bad thing. Surrounded by a selection of fine scottish musicians, with a nice contemporary slant, McCauley gets to sing of love and of the dark things in life.

McCauley’s voice is certainly wonderful to listen to. There’s a nice lilt of an accent, and a voice that can stretch from soulful and filled with power to the level where she seems to be smiling at you playfully while singing. It’s great to listen to, especially with the contemporary slant giving her voice a nice section of sound to fill up.

Add in that everything is played well and we should have a brilliant album. But there’s a very distinct style that McCauley evidently really enjoys writing and singing in, and the songs end up somehow feeling a little cut-and-paste: Arpeggios, first verse, chordal stuff from the band, more interesting counter melodies, repeat until the lyrics run out.

To be fair, the lyrics are pretty much bang on. They’re able to give a rough shape of a story without taking 30 verses or more to set the scene. It’s just that...there’s not much to the rest of it. All the songs that are written have an attempt at being mysterious and interesting, which is to be commended. But it’s not really held up by particularly exciting music, and spending time deconstructing the lyrics or story leads nowhere. It just ends up feeling like theatre scenery - it does the job until you look behind it.

Even the music that’s being used doesn’t really feel that exciting to listen to, and it’s a real shame, because there’s obviously a lot of thinking behind these lyrics which show that McCauley’s on the track to becoming a fantastic lyricist. Music ends up being repeated riffs for the whole song, and that can lead to a loss of interest after a few tracks.

It’s hard to recommend fully. The album is something that doesn’t really make its presence known with enough conviction, and as such seems happy to sit in the background instead of grabbing you with the intrigue that’s evidently meant to be there. It’s background music, which seems at odds with the style of song writing.