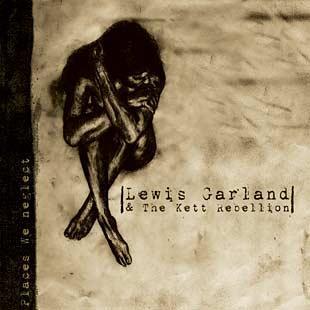 Lewis Garland and the band may well be familiar to bright young folkers as they seem to be have been around the live scene for a while now. I first caught them playing at the Slaughtered Lamb in London, on a night when they were the support and, frankly, upstaged the more well-known headline act, who shall remain nameless.

With their debut album, ’Places We Neglect’, I did wonder how the act would transfer to CD as a large part of their appeal had been their live energy and showmanship. I needn’t have worried. The swagger is still there.

Moreover, one of the things that strikes from the live show is Lewis’s eye for an intelligent, and dry-witted, lyric. The album immediately showpieces this with the glorious opener ’Run To Ground’, a caustic comment on those who espouse the fashionable cause, but don’t follow through.

It then moves into, what for me is not only the outstanding track on the album, but one of my favourite songs of the year so far, ’Is this war?’ - a heartfelt song which can but strike a chord with anyone who has been in the kind of attritional relationship that’s more about need than love. The strong start continues with ’Blackboard and Fingernails’, another slice of love gone bad, though this time you feel more tongue in cheek, with the playful verses and the singalong chorus line of ’evil is only a letter from love’..

The album then slows a tad with ’Someday’ and ’Life Drawing’. Both are weaker than the songs that have come before. The former, in particular, feels like filler. ’Life Drawing’, by comparison, is a gently touching lovesong, which just out stays its welcome with a repetitive ending, stretching on too long - a criticism which can also be levelled at the later ’A Long Way Down’.

’Roots’ is a fun bouncy folk lovesong, mascarading as a song about trees. ’Art’ seems to be Damien Hurst meets Neil LaBute’s ’The Shape of Things’, and is suitably blackly comic though perhaps it could have benefited from greater acerbic bitterness in the delivery. By comparison, ’Patchwork Quilts’ is a gorgeous number, a lament for the disappearing countryside which works beautifully in its simplicity.

I came to this album with a fair amount of expectation, and not a little trepidation, as Lewis and his Rebels had been one of my favourite live acts of 2008. As such, I’m glad to say it lives up to those expectations, and hopefully it will provide the band with a springboard to the greater recognition they deserve.

Released on 1 April 2009 by Lewis Garland & The Kett Rebellion.