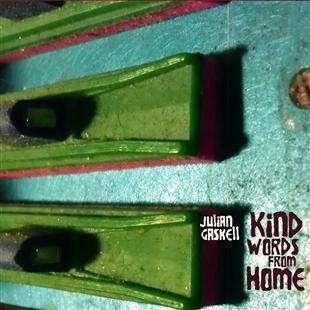 Kind Words From Home is a boisterous set of tunes from the eclectic multi-instrumentalist Julian Gaskell. It is incredible to look at the album artwork and information and see so few musicians listed because there is enough noise in here for triple the amount of people, as well as containing one of the most seductive accordion melodies ever on Same Old World.

The album has strong strains of punk-folk, gypsy Balkan traditional, sea-shanties, Franco-dirty tangos, ragtime piano, and slow laments. Which all somehow get together to create an anarchic vaudevillian mix which is packed full of energy. Something Julian does seem to be very much aware of as he charismatically hollers “everything I saw comes out as a growl, or a crude dirty howl.” There is a seamless movement between the offbeat, jaunty, discordant tracks which rise and fall with dramatic precision, helping to create a theatrical atmosphere.

Even in its slower moments there is a sense that his energy is still lurking beneath the surface. The final track, At the Edge of the World works as a nice reflective conclusion to the album as it accurately invokes a feeling reminiscent of a Saturday morning after a heavy Friday night.

The tracks carry a universal appeal, as they go sailing through the experiences of; the pain of lost love, the importance of freedom of spirit, violent lust, the emptiness of Capitalism, retrospective reflection, awareness of your own futility, purposeful drinking, the feeling that you’re not quite enough for someone, the importance of dreams, remorse for the end of an era, and the fresh expectations of new love.

This rambunctious album encapsulates a diverse range of genres, and whatever Gaskell’s voice lacks in tunefulness he makes up for in intense enthusiasm. Your imagination has to provide the gypsy dancing girls, the rum, and the candlelight but Gaskell does the rest.