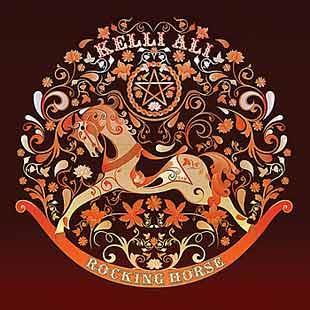 Kelli Ali started life as lead singer of the Sneaker Pimps. This snippet of information was enough to get me fairly intrigued about her third solo album, styled as "unique explorations into modern folk, medieval melodies and contemporary classical music". Whilst it never fulfils quite such heady claims, it does, for me, open the ever-present can of worms about what folk music actually is in the modern world. The press release talks of nu-folk, a phrase which generally applies to modern acoustic music which either references folk imagery, or uses folk instruments. For me, Kelli Ali is most certainly nu-folk, which also means, for me, she isn’t folk at all.

What Rocking Horse is really, is a collection of ethereal and haunting tracks, set against the experience of Ali’s nomadic wanderings in California. The title track, Rocking Horse, combines a soft floating vocal track with heavy guitar chords for an intoxicating mix, but much of the album does not live up to this promise of real musical excitement, instead treading familiar paths. Flowers, at over six minutes, eventually builds to a powerful crescendo, but it’s too little too late. If you ever want to go wandering yourself, the album fits perfectly with stunning vistas, deserted roads and communing with nature. But for me, at my 9-to-5, it is all a little too airy-fairy.

Released by One Little Indian on 24 November 2008.