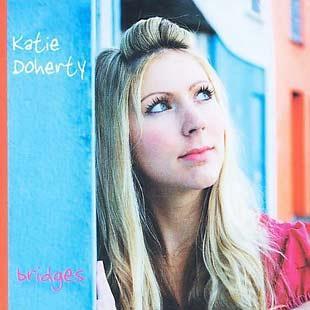 Hailing from the North East, Katie Doherty has a degree in Folk and Traditional Music from Newcastle, and is one of a number of young acts to have been championed by Folkworks. However, her influences go beyond that and while her 2007 album ’Bridges’ has a traditional music feel, it is almost entirely self-penned.

Unfortunately the album doesn’t start that promisingly. Katie’s voice is pleasant enough, but the opening songs are innocuous, playing away happily as background but never really engaging. There are signs that lament ’Sing Softly’ may be a grower, but the album doesn’t really start to come to life until the fourth track, ’Lady Midas’ - a clever self-penned variation on the ’Searching For Lambs’ tune, in which the maiden turns down the noble lord.

Similarly, the Burns-inspired ’Winter is Past’ is a joy, lifted by some excellent pipe work from Calum Stewart. Then comes perhaps the album highlight, the tragic ’Snow Dove’, lyrically strong, with a nice vocal, and well-pitched unobtrusive musical accompaniment.

’Port and Brandy’ is a nice song of lost love, but for me, the album then starts to drift again with ’Bonnie Laddie’ and ’Listen’ - before regaining its stride with ’Something Warmer’ and ending on a bouncy high with ’Sitting On Top of the World’.

There is a wealth of talented female folk singers out there. For someone to make their mark, they need both an excellent voice and the best choice of material. On the one hand Katie has the former, and deserves credit for being more than a voice, penning so much of the material on this CD. She shows she has potential here, with some genuine gems. However, ultimately too many of the songs lack that extra spark that would make the album stand out.