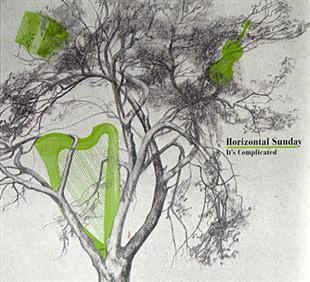 Following on from the finish of their degrees at Newcastle, Horizontal Sunday (Rebecca Nice, Sarah Dorward and Dave Gray) have now gone on to record an album of tunes called It’s Complicated.

There’s a fine selection of tunes here, some written by the band, others from the world of current tune writing. There’s a fair few tunes written by Andy Cutting, but if you think that’s a bad thing then you’re probably broken. The tunes range from slip jigs to soft airs and give the chance for the group to show off their different styles.

The problem is that although it’s played well, it just sounds uninspiring. There’s a lot of really nice tunes in the album (Washington Square Park, Waiting For Janet are fine examples), but the music fails to really grab your interest.

It’s hard to work out what’s missing from the sound, and whether it’s just the fact it’s a trio is a fair point to consider, but even so the sound just seems to lack something. It’s by no means a bad album, certainly one you can listen to in the background and enjoy, but if you listen closely and pay attention to it, there is a feeling of something missing.

To be fair, the playing is good fun. It’s all good natured, accomplished playing from the group. The tunes from the band are enjoyable, probably because of the personal nature of many (a jig to celebrate a retirement of a school teacher, a strathspey for friends and such). Abheil Sigh Deiseil? is a wonderful fiery tune that the girls play with great gusto.

Should you buy this? It’s hard to say. There’s certainly nothing patently wrong with the album that means it should be avoided. But there’s nothing special about it either, so it doesn’t give you any reason to really search it out. If you come across the band, they’re worth a listen, but it’s probably worth listening to them first before you buy the album.

1. To the Edges / Jock Broon’s 70th
2. Return from Helsinki
3. Waiting for Janet / Suspended Slipjig
4. Musicus Dolomiticus
5. Ardhaven
6. A Bheil Sigh Deiseil?
7. Washington Square Park
8. Under the Influence / Trip to Portugal
9. The Shexshy Ladies of Raasay / the Flofs of Fowlis Hall
10. The Devil’s Throat