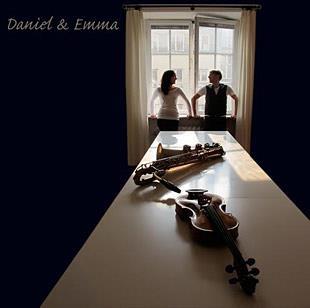 Daniel & Emma bring an intriguing combination of saxophone and fiddle, British and Swedish music together in an album that must surely be located somewhere in the North Sea.

Innerligheten is primarily an instrumental album, mostly containing tunes from within the last 30 years with a couple of traditional ones thrown in.

The first track, Mari ar moal / Rowan is the only one to contain speech - William Blake’s Nurse’s Song, recited wonderfully by Richard Wistreich. The tune and words are perfect for the newborn baby that inspired the track.

Daniel truly plays folk saxophone, not unnecessarily jazzing up the music, but instead being sensitive and dynamic, whilst Emma’s fiddle swoops and soars.

There is a tightness in the playing which reminds me a little of Belshazzar’s Feast, also because a few tracks have something of a Playford element seeping through them.

Innerligheten, the title track, translates roughly as ’tenderness’, and the tune certainly lives up to that name, lending though to happy, peaceful memories.

The strathspey Sweetness of Mary will for many be the most familiar tune on the album. Traditional and popular, both session musicians and ceilidh dancers will recognise it. Daniel & Emma cleverly alternate instruments throughout the tune, in a manner that effectively paints the picture of two people dancing the strathspey.

Vintergatan does not translate as ’winter garden’ but instead it is the Swedish word for the Milky Way. Armed with this information the fiddle plucking gives a sense of travel and endlessness. Meanwhile the saxophone soars and explores with occasional moments of drama and excitement.

Rävhalling has good pace as a tune, and the added bonus of someone dancing to the music on the recording. Whilst it is not the clear percussive sound of clog, the steps that can be heard, and the exclamatory ’huh’ give real vibrancy to an already exciting tune.

Innerligheten is a bold mixture of Swedish and British folk music from two performers entirely comfortable with both traditions and each other.